In a World Just Right by Jen Brooks Book Blitz and Giveaway! 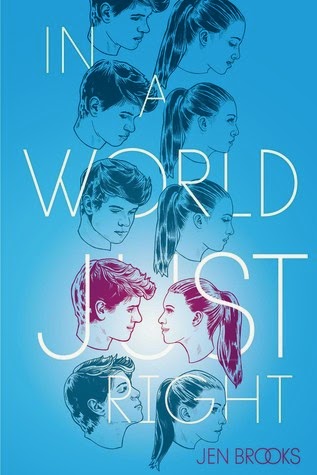 
Imagination takes on new meaning for a uniquely talented teen in this debut novel that is a breathtaking blend of contemporary, fantasy, and romance.
Sometimes Jonathan Aubrey wishes he could just disappear. And as luck—or fate—would have it, he can. Ever since coming out of a coma as a kid, he has been able to create alternate worlds. Worlds where he is a superhero, or a ladies’ man, or simply a better version of himself. That’s the world he’s been escaping to most since sophomore year, a world where he has everything he doesn’t have in real life: friends, a place of honor on the track team, passing grades, and most importantly, Kylie Simms as his girlfriend.
But when Jonathan confuses his worlds senior year and tries to kiss the real Kylie Simms, everything unravels. The real Kylie actually notices Jonathan…and begins obsessing over him. The fantasy version of Kylie struggles to love Jonathan as she was created to do, and the consequences are disastrous. As his worlds collide, Jonathan must confront the truth of his power and figure out where he actually belongs—before he loses both Kylies forever.

This excerpt is near the beginning of the book, and is a backstory segment about Jonathan’s world-making ability.

Here’s a story for you. Once upon a time there was this kid named Jonathan Aubrey. He was eight years old. He had a mom and a dad and a six-year-old sister, Tess, and an Auntie Carrie and Uncle Joey. One day they all got on a plane to Disney World. Except for Uncle Joey, who was on some business trip or other. It was going to be the funnest, most perfect trip of a lifetime. The airplane took off . . . and fell out of the sky into Boston Harbor. (Yes, the Tragedy-in-the-Harbor, the famous crash they contrasted with the Miracle-on-the-Hudson.)
Little Jonathan was one of three people who survived. He spent three months at Massachusetts General Hospital in a coma, and when he woke up, they sent him home. Except there wasn’t anyone at home anymore. They were in the ground at Pine Street Cemetery, and he had missed all the funerals and everything.
He went to live at Uncle Joey’s house instead. Uncle Joey tried to be good to Jonathan, but there was that business thing that often kept him away, and Uncle Joey was grieving just as bad because he’d lost Auntie Carrie.
Jonathan didn’t come out of that coma the same way he went in. He had a little lag in his speech. He limped. He had burns and scars on parts of his body. Most of the ugly skin he kept covered with long sleeves and pants, even on days when it got to be almost a hundred degrees. But one uncoverable, ragged red scar ran from his eye to his jaw, and the marks of the stitches made a railroad track on his face. When he returned to school, kids were afraid of him. Teachers tried to be nice, but they just couldn’t stop every kid who whispered “Frankenstein.” Jonathan learned to take it quietly. At recess he’d sit on the monkey bars pretending he was part of everyone’s play, even though he got thoroughly ignored. He paid attention in school and liked his teachers, but teachers’ attention wasn’t enough, and they tried too hard to make him feel normal. He wanted so much to be asked to play kickball. The closest he got was when Hunter LeRoy made him fetch the ball out of some poison ivy, saying that if he got a rash it couldn’t make him any uglier. He really said that. Hunter LeRoy is a jerk to this day.
Jonathan would sit in his room in Uncle Joey’s house and stare out the window. Sometimes he would pretend the street crawled with kids fighting some kind of rebellion against alien invaders, and he was their leader. He would have friends and daring escapades with a healthy dose of heroics, and his scar would be a badge of honor, a war wound.
One day he squeezed his eyes shut so tightly with longing that when he opened them . . . he was standing in the middle of a battle with a gun in his hands. There were people and aliens running in the street. Laser blasts shot craters into the manicured lawns. Tanks, helicopters, bodysuits full of gadgetry everywhere. He was wearing a bodysuit full of gadgetry. “Commander Aubrey!” someone yelled. Jonathan made a motion with his arm, and a dozen kid soldiers followed him down the street to fight the alien invaders.
This new world was Jonathan-is-a-hero. He went there a lot. Until he figured out it was not the only world he could make.

Jen has a habit of being deeply moved by profound ideas, and her writing reflects her interest in exploring human goodness, relationships, and the feeling of being a part of something greater than oneself. She loves the science fiction and fantasy genres because of their dazzling possibilities for portraying characters and ideas. She credits her undergraduate experience at Dartmouth College, her MFA at Seton Hill University, and her fourteen years of English teaching with shaping her writing.  She is grateful to her family, friends, and students for inspiring her to write.