The Occasional Diamond Thief by J. A. McLachlan Blog Tour and Giveaway!

Welcome to the blog tour for The Occasional Diamond Thief. (isn't that an awesome title ;)) You can check out the full schedule HERE. 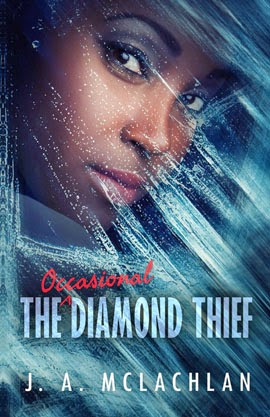 What if you learned your father was a thief? Would you follow in his footsteps, learn his "trade"? If you were the only one who knew, would you keep his secret?
When 16-yr-old Kia is training to be a universal translator, she is co-opted into traveling as a translator to Malem. This is the last place in the universe that Kia wants to be—it’s the planet where her father caught the terrible illness that killed him—but it’s also where he got the magnificent diamond that only she knows about. Kia is convinced he stole it, as it is illegal for any off-worlder to possess a Malemese diamond.
Using her skill in languages – and another skill she picked up, the skill of picking locks - Kia unravels the secret of the mysterious gem and learns what she must do to set things right: return the diamond to its original owner.
But how will she find out who that is when no one can know that she, an off-worlder, has a Malemese diamond? Can she trust the new friends she’s made on Malem, especially handsome but mysterious 17-year-old Jumal, to help her? And will she solve the puzzle in time to save Agatha, the last person she would have expected to become her closest friend?
Kia is quirky, with an ironic sense of humor, and a loner. Her sidekick, Agatha, is hopeless in languages and naive to the point of idiocy in Kia's opinion, but possesses the wisdom and compassion Kia needs.

EDGE Publishing has a Thank you Gift for anyone who buys the print version of the book.  If they send an email to events@hadespublications.com with their Amazon receipt, they will receive a copy of a short story that features Kia.

Praise for The Occasional Diamond Thief by J. A. McLachlan

*** "J. A. McLachlan is a terrific writer -- wry and witty, with a keen eye
for detail. I've been following her work with interest and delight since
2003. In a world where young-adult fiction is booming, The Occasional
Diamond Thief propels McLachlan to the front of the pack." -- Robert J.
Sawyer, Hugo Award-winning author of FlashForward

"Flawless--The Occasional Diamond Thief was one of those rare stories
where I found myself hanging onto every word. McLachlan delivers a
fast-paced, unpredictable story with perfectly-executed twists.
Descriptions were succinct and epigrammatic with no room for boredom. It
felt so real, it was almost like being in the theater with a surprise
treat at the end. Much like the theater, once the credits have started to
roll and the crowd starts to thin, there was a snippet at the end that you
do not want to miss." -- BittenbyBooks.com

"Loved it! I haven't read a heroine I loved this much since Katniss
Everdeen. McLachlan's Kia is smart, tough and hilarious, and pairing her
with serene, forgiving Agatha left me laughing long after I finished the
story. The settings were vivid, the plot raced along, and the themes kept
me turning pages. McLachlan combines her love of science fiction, ethics
and good, old-fashioned storytelling in The Occasional Diamond Thief, and
the results couldn't be better. I loved every page." -- Amanda Darling,
Screenwriter


Hello, I’m J. A. McLachlan, the author of The Occasional Diamond Thief. I’m so pleased to be meeting you, and I’d like to thank Natalie for having me here on Book Lover’s Life today. This blog tour is part of my online launch of The Occasional Diamond Thief, and I’ll have something different at each stop – book excerpts, author and character reveals, vlogs, reviews and blog posts – for you to enjoy. You can find The Occasional Diamond Thief in print:http://www.amazon.com/dp/1770530754/edgescienceficti and in ebook form: http://www.amazon.com/dp/B00NF9NYJMAnd you can find me at: http://www.janeannmclachlan.com
Guest Post: The Advice I Didn’t Want
I have a couple of beta readers who are very tough on me. I don’t agree with everything they suggest, but most of it is spot on, and my novel is better for listening to them and making needed changes. It’s very hard to see the warts on your own story. You need an unbiased eye.
The advice I didn’t want to follow? The cover artist for The Occasional Diamond Thief send me three or four different covers. The one I liked had both main characters on the cover. I set up my three top choices for my launch team to comment and vote on, but I cheated a little. I had the cover artist add the real title etc. to the one I liked, so it looked finished and professional; but I had the artist just leave the words (title here) and (author here) on the other two covers. I loaded the dice, so to speak. Then I asked them to vote for their favorite.
One of the team members was one of my beta readers – she had already read the book and liked the same cover I liked, with both Kia and Agatha on it. We were both so excited to finally see the characters. But ALL the rest of the team, who had not read the book yet, liked this cover, with Kia in a sheet of blue hail. It was eye-catching, different, mysterious. It made them curious.
Nothing I could say swayed them. I set the whole thing up to listen to their advice and they weren’t telling what I wanted to hear. Finally, I realized that I would be selling this book to people who hadn’t read it yet. People like those in my launch team. So I took their advice and went with this cover. It was hard, but I’m so glad I did. Everyone who sees it likes it – I’ve had so many compliments on it.
I am determined, though, to use that cover with both characters on it for a future book about Kia and Agatha!


… to be continued soon on: www.elsieelmore.com

J. A. McLachlan was born in Toronto, Canada. She is the author of a short story collection, CONNECTIONS, and two College textbooks on Professional Ethics. But speculative fiction is her first love, a genre she has been reading all her life, and The Occasional Diamond Thief is her second in that genre, a young adult science fiction novel, published by EDGE Science Fiction and Fantasy Publishing. After over a decade as a college teacher, she is happy to work from home as a full-time author now.