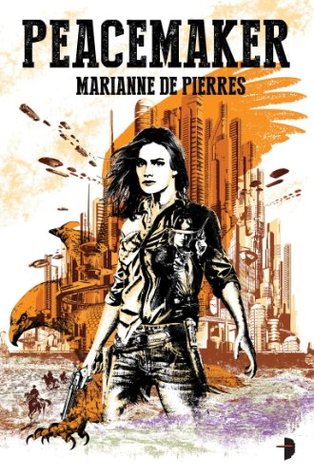 
Virgin Jackson is the senior ranger in Birrimun Park – the world’s last natural landscape, overshadowed though it is by a sprawling coastal megacity. She maintains public safety and order in the park, but her bosses have brought out a hotshot cowboy to help her catch some drug runners who are affecting tourism. She senses the company is holding something back from her, and she’s not keen on working with an outsider like Nate Sixkiller.
When an imaginary animal from her troubled teenage years reappears, Virgin takes it to mean one of two things: a breakdown (hers!) or a warning. When the dead bodies start piling up around her and Nate, she decides on the latter.
Something terrible is about to happen in the park and Virgin and her new partner are standing in its path…

Virgin Jackson is a ranger. She loves her job and the solitude it brings, that is until she is told a Marshall named Nate Sixkiller is coming to work with her and she has to show him the ropes. To her its an annoyance and something she isn't looking forward to but that is only the start of her troubles. Dead bodies seem to be following her around!! The first body she finds is inside her park after dark. The police think she did it and besides having them trailing her everywhere she has to put up with multiple kidnap and murder attempts. Why did this all start happening as soon as Sixkiller came? Can she stay alive to solve whats happening? And why is she seeing an imaginary animal that she hasn't seen since she went to therapy?

Virgin is a kick ass character. She is more than capable of looking after herself. When she finds the first dead body her life spirals out of control. She is shot at, pecked at, had a spear thrown at her and had multiple kidnap attempts, yet each time she gets up and gets back on the horse so to speak. She is a straight talking, no nonsense type of girl and I loved that.

Sixkiller meanwhile is mysterious, strong and someone you would want on your side. With the multiple attempts on Virgins life, Sixkiller kind of becomes her bodyguard, which amuses him but annoys her!!

Peacemaker was a total surprise for me. It was extremely faced paced with well developed characters. We have a little romance thrown in, Heart is an exotic dancer and has a casual relationship with Virgin. As the story goes on we see him showing that he really cares about her but will the Marshall throw a spanner in the works? Well you will have to read it to see.

Overall we have a plot that has layer upon layer of twists and turns that unravels slowly. We have gang wars, we have myth and legend and imaginary animals! We have spiritual undertones, a feisty MC and a strong male MC, we have a western feel and all the gunslinging that comes with it, we have a suspenseful plot that will keep you turning the pages to see what will happen next. Wrap all them up in one tidy bow and they will produce Peacemaker. It has a mix of everything a great book should, mystery, suspense, fantasy and awesome characters. Its a unique and fascinating world that's rich in detail and its definitely a book not to be missed!!