Welcome to the cover reveal for Shifter's Heart by Desiree Williams. It's book 2 in the Heart Song Trilogy. Before we get to the cover, check out the blurb...

As the flames of Varkadon spread, war rips through the Shifter Territory…With the Aldonnian kingdom celebrating the news of her brother’s soul bonding, Laelynn seizes every opportunity to drive herself to the brink of exhaustion. If her body is worn, then her brain would be too tired to dream. Laelynn knew the men who’d captured her were gone from this world, but that didn’t stop the haunting images from plaguing her mind. Not even the pesky thorn-in-her-side Shifter Prince could keep the dreams at bay. Though Dustan’s commentary through their mental bond had kept a lingering smile on her lips, despite the battles that rage within her. Yet when Dustan distances himself Laelynn questions the connection between them. Those fears rise when her own talents begin to morph and growth into the unexpected. Torn between love and faith, Laelynn strives to find the purpose behind the evolving gifts. What she discovers is far more than she ever imagined. As tragedy befalls the Shifter Territory and brother battles against brother, Laelynn knows what must be done. Face her demons and triumph, or she’ll never claim the song of her heart.


Now onto the awesome cover

What do you guys think?? 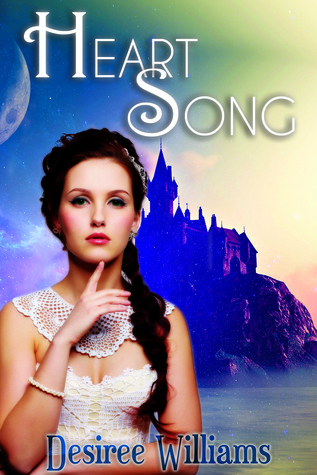 In Aldonnia, the evil of Varkadon overflows its borders. War ravages the lands…

For as long as eighteen year-old Alanna can remember she’s lived in hiding, sealed off from the outside world. Despite a future built around a steadfast rule of seclusion, Alanna dreams of the impossible. Of a life outside of her parents’ cabin. A life with more for company than just birds and woodland creatures. A life she knows deep down is impossible for someone with gifts like hers.

That all changes the day Alanna finds a man floating face down in a stream. Despite her parents’ warnings, Alanna pulls the injured man out of the water and heals him with her elemental talents. Just another good deed. Until the man wakes and Alanna realizes so much more has happened than simply a life saved. The healing she performed on the stranger bound her soul to Jerric, the prince of Aldonnia.

Alanna’s heart wants to keep the prince, but duty and destiny intervene. Alanna’s world is rocked as her parents are lost. Left in the care of family she didn’t know, Alanna learns more than she wanted to about the evil threatening the lands. There is much more behind her parents’ drive to protect. Alanna learns her gifts were bestowed in order to fulfill a greater purpose. A greater calling. One her enemies seek to destroy at all cost.

Alanna’s choice is clear. To either ignore her destiny and remain hidden, or boldly fight to keep what sings to her heart.

Dustan stretched as he stood, knocking off the dirt and dried foliage that clung to his pants. The wind picked up speed around him and Dustan stiffened as the hairs on his neck rose. His eyes swept the Clan’s burial site, evaluating the shadows of the nearby woods and memorial monuments. Creaks of branches and the rustling of leaves met Dustan’s ears as the wind whistled through the trees. He breathed deeply, sniffing the air to catch any passing scents. Nothing. Balling his fist, Dustan stepped into a battle stance. Preparing.
What he hadn’t expected was a bright, blinding light to burst a few feet in front of him. Shielding his eyes with his forearm, Dustan attempted to see beyond the light for a form or bodily outline. His heart skipped a beat when a voice spoke from within it.

“Dustan, High Prince of the Shifters, mate and heart song to Laelynn, Princess of Aldonnia. The Lord of Heaven has heard your declaration. Do you also vow to love her above all others?”

The voice, powerful and slightly musical, filled Dustan’s ears and mind. He stood gaping at what was before him. He’d heard stories about Messengers from the Lord of Heaven, but he never believed any of them. The stories were always so farfetched. Too fantastical to be true.

“Warrior,” the voice sang again, “the princess of Aldonnia will face many things as darkness tries to overcome her. Do you vow to not only protect her, but to love her above all others? To be her light?” The musical voice boomed, and Dustan shook himself from his state of shock. He was Laelynn’s heart song? How? They hadn’t shared a kiss. That he would’ve remembered. Regardless, soul bonded or not, Dustan’s answer would be the same.

“Yes. I vow myself to Laelynn. I pledge to ensure that she is protected and loved above all others.” As the last words fell from Dustan’s lips the light sped forward, stabbing its way into his chest. Dustan clawed and yelled in vain. Intense pressure built as the Messenger invaded every cell of his being.

Dustan dropped to the ground. A cry tore from his mouth as searing pain radiated from his back; as though duel blades were cutting a jagged pattern down his spine. Light shone from his eyes and limbs, illuminating the burial site. His chest heaved with labored breaths and a mangled cry passed his lips as he watched his hands form into the impossible. Dustan’s feet and legs following behind them, his entire body morphed into a vision that would haunt him.

The Messenger slowly detached itself from Dustan, leaving his body to crumble to the ground. Dustan staggered to his feet, tossing his head to clear his mind. As the fog lifted he was again faced with the horrors of his new body. His mind raced to find the logic behind what his eyes were seeing, screaming that it wasn’t possible. That it wasn’t fair. The dreams of life he held just moments ago, gone in an instant.

A roar of agony ripped through the air. It was no longer a roar of a man, but of a monster.

About the Author
Desiree Williams is a dreamer by day and chocoholic by night. She lives in the beautiful state of Kentucky with her husband and daughter, where she juggles life as a wannabe supermom. Desiree is a lover of food and avoider of dirty dishes. She delights in making people laugh and strives to bring hope and love with her wherever she goes. You can find out more about Desiree and her books at www.desireewilliamsbooks.blogspot.com