Come Back To Texas by K.K. Hendin Book Blitz and Giveaway! 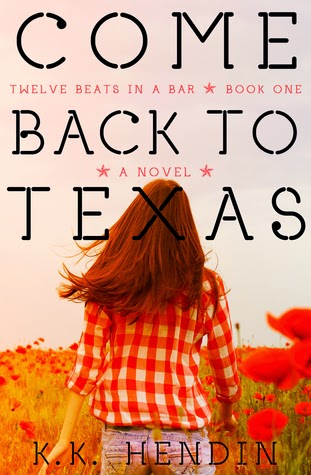 
Everyone thought we’d be the ones who made it through high school. The ones who’d get married and stay married forever. The example of how young love can work.
We thought so, too.
Too bad life had other plans.
It’s been three years since Hayley and Nate broke each other’s hearts. Three years, and a lot has changed. Hayley’s a freshman in Bushwick University, and the only things keeping her sane are stress baking, and her a cappella group, Twelve Beats in a Bar.
Nate’s a Marine, stationed in Afghanistan. The only thing that’s keeping him sane is the last picture he has of him and Hayley, and the hope that maybe when the hell of deployment is over, he can find her again and apologize.
One explosion will change everything.
When a bomb kills all of Nate’s unit, leaving him missing a leg and eyesight in one eye, he’s sent back home to Texas. Texas, where he loved Hayley more than he could possibly imagine ever loving anyone else.
With seemingly endless amounts of free time and needing something to distract himself, Nate starts making YouTube videos, imploring Hayley to come back to him, and come back to Texas.
Hayley’s life is wrapped around the Beats, making sure she doesn’t flunk out of biology class, and babysitting Ohio’s smallest monster, Brandon. She doesn’t want to admit it, but she misses Nate more than anything.
It’s too bad she doesn’t know just how much he misses her, too…

(A flashback to the first time Hayley and Nate met)
He turned around, and his eyes connected to mine. “Hey!” he called. “You!”
My eyes widened. “Me?” I pointed to myself.
“Yeah.” He was far enough away that he was calling. “What’s your name?”
Why was he talking to me? Was this some kind of joke? I glanced nervously at Josh, trying to see if this was for real. I couldn’t tell.
“Hayley,” I said quietly- loud enough for him to hear if he was listening close enough, but quiet enough that I could deny I was talking to him if I needed to.
“Hayley!” he called back, grinning. “What’s your stance on ice cream? Positive or negative?”
“Why?”
“For science.”
“What kind of science?”
“Does it matter?”
“Well, if it’s for curing cancer or something, I’ll tell you the truth. If it’s for something else, I might not.”
“You would lie to science?”
“You can’t lie to science,” I said. “Science isn’t a person.”
“Yeah, it is,” Josh said. “Science is the skeleton in the lab.”
“I thought his name was Fred.”
“His full name is Fred Skeleton Montgomery FisherHell the Twelfth,” Harrison said. “But I wasn’t actually talking about him. C’mon, Hayley. How do you feel about ice cream?”
“If I tell you, will you let me do my homework?”
“Deal.”
“I feel positive about ice cream.”
“Yes!” crowed Harrison. “One more question.”
“No.” I tried to bury my grin as I bent my head down to concentrate on my English assignment.
“Pleeeeeease, Hayley.”
“You said you’d let me do my homework after the ice cream question.”
“But science!”
“No.”
“You’re a tough one,” he said, standing up. Wait. What was going on? Where was he going?
The next thing I knew, he was standing above me, blocking the sunlight completely. “You’re blocking my sun,” I said, not looking up from my homework.
“What is science going to do without your answer?” he said, leaning down toward me. “It’s going to cry itself to sleep tonight because you don’t care enough to answer the question.”
“You’re crazy, you know,” I said, trying not to giggle. “Maybe you should talk to science about your feelings.”
“If I’m that crazy, talking to science would only make things worse.”
Huh. That actually made sense.
I rolled my eyes. “Okay, science’s best friend. What’s the second question?”
“How do you feel about Rocky Road ice cream?”
“I like it.”
“A lot or a little?”
“What does it matter?”
“Well, those morons over there claim loving Rocky Road is unnatural.”
“You should find new friends,” I said.

KK Hendin's real life ambition is to become a pink fluffy unicorn who dances with rainbows. But the schooling for that is all sorts of complicated, so until that gets sorted out, she'll just write. Preferably things with angst and love. And things that require chocolate.
She spends way too much time on Twitter (@kkhendin), and rambles on occasion over at www.kkhendinwrites.blogspot.com.


Three winners, each one gets their choice of any two signed copies of K.K. Hendin's books (Heart Breaths, Only The Good Die Young, Come Back To Texas) and a guarantee of an ARC of the second book in the TBIAB series when it's available.

Open US only; ends September 1st