The Silver Siren by Chanda Hahn Book Blitz and Giveaway! 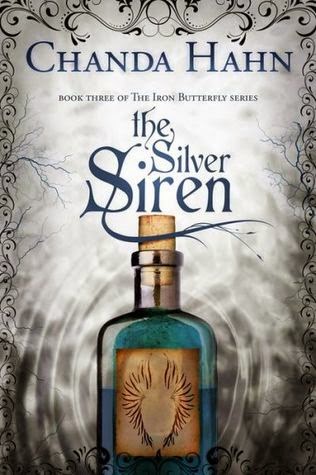 Every journey has an end.
Unable to find the answers she sought in Skyfell, Thalia, Joss, and Kael travel to Haven with a prisoner in tow. An attack on the road waylays their plans, and Thalia finds herself traveling alone with
Kael to the hidden sanctuary of the SwordBrothers.
But war is on the horizon and the Raven is amassing his army. This time, the target is not Calandry, but the Sirens of Sinnedor. When family ties are revealed, Thalia must choose sides. Desperate to break the final seal on her power and save those she loves, will Thalia willingly taste the bitter pain of the iron butterfly machine one final time?

Someone yanked the sack off of my head. I’d been so lost in thought that I didn’t hear him come over. My eyes flew open and I saw a young man with pimples. He grimaced when he looked into my eyes. He had pulled off his red robe and had it tucked under his arm. I had yet to see my eyes, so I could only imagine what they looked like to send such fear into him.
“See? She’s alive,” he yelled over his shoulder.
“Quick, someone’s coming. Knock her out so she doesn’t warn anyone.” The now familiar voice yelled into the darkness. The young pimple-faced Septori grabbed my head, pinched my nose, and poured a draft into my mouth.
The taste was different. I was actually shocked to realize they’d switched tactics. It was a sleeping draft. I fought against my eyelids as huge weights seemed to tug them down.
The young man jumped up and moved into the shadows of the cave, blade in hand. A few moments later, I saw the familiar outline of Kael at the entrance to the cave. Walking right into a trap.
“Wait!” I tried to whisper, fighting against the sleeping draft.
Kael kept walking, oblivious to the trap.
I heard swords being drawn behind him. The Septori closed in.

He was outnumbered and cornered.

Chanda is a bestselling and award winning author of the UnEnchanted: An Unfortunate Fairy Tale series and the Iron Butterfly series. She’s been a bestseller in five countries and was named one of Amazon’s top 100 customer favorite author. She uses her experience as a children’s pastor, children’s librarian and bookseller to write compelling and popular fiction for teens. She was born in Seattle, WA, grew up in Nebraska and currently resides in Portland, Oregon with her husband and their twin children.
Learn more about this author visit her website www.chandahahn.com
Follow her on twitter: www.twitter.com/chandahahn


A Kindle paperwhite
Open to US and Canada; ends August 25th