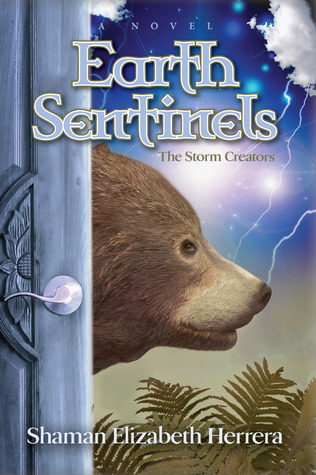 A fallen angel somberly observes the world being destroyed by mankind’s greed, corruption and indifference. Realizing drastic measures are needed, he begins searching the globe for people who might join his quest to save the planet.

He finds 17-year-old Zachary, whose family’s organic farm is being ruined by fracking; Haruto, living in Fukushima, Japan, where the nuclear meltdown is raging out of control; Mahakanta, a cotton farmer in India, who used GMO seeds with devastating results; the Amazonian tribe members, Conchita and her father, Pahtia, fighting against intruders illegally tearing down their rainforest; and the Bear Claw First Nation Tribe who are dealing with an unstoppable oil spill that is ruining their traditional hunting grounds.

Using supernatural powers, the Earth Sentinels grab the world’s attention, but as the events unfold and countries retaliate, the characters are forced to question their motives and listen to their hearts.

A white, double cab pickup truck was driving down Highway 55 in remote Canada, heading toward Bear Claw Lake, one of the deepest and largest bodies of water in the Alberta province.
The passengers were the second team of specialists commissioned by the Falicon Gas and Oil Company to investigate an ongoing oil spill. Their predecessors had been unable to solve the crisis, because this was a new kind of oil spill, the kind with no “off button.”
The disaster had been caused by the company’s use of the in-situ extraction method, which pressurized the oil bed with extremely hot steam and chemicals. The pressure cracked the reservoir, causing oil to escape through a spider web of cracks in the earth, rising to the surface where it smothered the plants and trees and bubbled from the lake.
Falicon and the Canadian natural resources department publicly announced that the affected areas were being cleaned up and reduced daily. However, it was not true. To safeguard their interests, a no-fly zone was put into effect over the lake. The official statement was that it protected civilian planes and helicopters from the increased activity around the nearby military base.
The double cab pickup turned off the main highway onto a paved two lane road that eventually became a dirt track. Dust billowed behind the vehicle as it sped toward the disaster. After several miles, the driver caught a glimpse of a truck in his rearview mirror. It was an old GMC, painted robin’s egg blue with a rusty chrome grill and bumper. Inside were two men from the nearby Bear Claw First Nation reservation, glaring at Falicon’s hired men. The passenger riding shotgun held a Winchester 30-30 rifle between his knees, the barrel protruding a few inches above the dashboard.
The oil company driver said, “Don’t look, but we’re being tailed by Indians.” The engineers and scientist immediately peered out the back window. “Jesus! I told you not to look!” The driver was clearly irritated. The passengers spun around, focusing their eyes straight ahead. “Now, keep your cool. They’re probably just headed back to the rez and havin’ a little fun with us.” The driver’s comments provided little relief to the others, who were obviously uncomfortable.
The blue truck closed in on them, nearly bumping their rear end before easing back. The engineers and scientist tensely waited for the driver to react, but he stayed calm, stating matter-of-factly, “Don’t worry. Those punks won’t do anything. Nobody wins if someone gets hurt out here.” They drove in silence until the truck behind them finally veered off, heading toward tribal territory.
A mile later, the crew came to a security check point. A guard waved them through, directing them to a grassy area where a dozen company vehicles were already parked. Beyond this point were hundreds of square kilometers of what used to be a virgin forest.
The men got out to remove their equipment from the back of the truck. When everyone was ready, they trudged through the eerily quiet forest.
Mike, the head engineer, sniffed the air. “Something smells terrible! This isn’t going to be pretty.”
The team cautiously approached the lake, observing the disaster splayed out before them. The water was covered with an iridescent film of oil, decomposing into a foul, brown sludge along the shoreline. A few Canadian geese and a loon gasped for air, struggling to flap their oil-covered wings. A bloated beaver carcass bobbed in the lake. Dead walleye, sauger, lake trout and other fish species floated on the surface. The surrounding vegetation lay rotting in the sun. The cleanup crew, fully protected inside their bio-hazard suits, was using rakes to cull the tar balls.
The scientist stared at the disaster. “I gave my recommendations early on. I told headquarters we had no ‘Plan B’ if something went wrong, but they went ahead anyway. Fuck the animals! Fuck the planet!” He threw his hard hat down. “Do they really expect us to depressurize the earth!?”
The ground shuddered, sending a warning signal.
“Did you feel that?”
Mike answered, “Yeah…didn’t think they had tremors here.”
Suddenly, lightning blazed out of the clear blue sky, striking the water. Thunder boomed as the oil ignited, creating a lake of fire. The flames reached the shoreline, following channels of oil runoff, spreading through the forest until one of the fire streams reached an oil reservoir where it exploded, creating a mammoth ball of fire that billowed over the trees. The force of the combustion knocked down the engineers, scientists and cleanup crew. Thick, black smoke descended upon the dazed team, who struggled to their feet, coughing and choking. The earth shook again. Everyone raced out of the man-made hell.

On the other side of the forest, the Bear Claw First Nation Tribe heard the explosion and saw the fireball arch over the trees. Children stopped chasing a ball. Men playing poker in the shade were dumbfounded by the sight. Finally, one of them spoke, “I knew the oil company would screw up again. They always do.”
“It’s time for a council meeting,” said Tom Running Deer, “It’s time for this to end.”

Please tell us a bit about your childhood.
I was born in a bi-racial home, a mixture of Celtic, Hispanic and Apache. I lived the first half of my life in the city and the second half in the country, living in a house my father and his brothers built on an acre of my grandparent’s farm.

I was raised in a Christian home, but lost my faith in my early twenties. For over a decade, I searched for something to fill the void, and eventually discovered Native American spirituality (shamanism). Through this spiritual practice, I unexpectedly became a catalyst for healing and miracles. These events led me back to a belief in a higher power.

My great-grandfather was a full-blooded Apache, who raised my father. I have memories of my great-grandfather, who smuggled sugar and flour from Mexico into Texas, exchanged gunfire with Texas Rangers and crossed paths with Pancho Villa, sitting in the kitchen reading a newspaper while my great-grandmother made tortillas.

While growing up, my family spent most weekends with our extended family. On my father’s side, they would play guitars and eat.

My grandparents and great-grandparents on both sides of my family owned farms, so I spent a lot of time exploring the fields and barns, and playing with the animals.

What Childhood experience impacted you the most?
The ’70s recession caused my parents to go bankrupt. My father was a homebuilder, who was hit hard by the high-teen interest rates. There were times when we literally did not have enough to eat or money to heat the house. I slept in my winter jacket to stay warm. People would joke that I always had my coat on — they just didn’t know why.

Most kids complained about their school lunches, but for me it was the biggest meal of the day and I looked forward to it. Fortunately, within a few years we were back on our feet. My mother once told me she never would say we were poor, because as soon as she said it, it would be true.

Did you like reading when you were a child?
Reading was the only thing that I wanted to learn at school, and once I started reading, I never stopped! In third grade, I won the class reading contest by reading 80 books!

Do you hear from your readers much? What kinds of things do they say?
The response I get the most is them asking if I am available to perform shamanic healing. Other times, they will mention that my book had a profound impact on their life, which is a wonderful confirmation that I am on the right track.

Do you have a specific writing style?
I start with an idea and let it ferment. Then, I research it for several months. Along the way, flashes of scenes will appear, showing me characters, strifes, solutions, but never the complete story. Then I just let the story unfold by sitting at the computer and asking myself, “What happens next?” or “I wonder what so-and-so is doing?” Because I have been a graphic designer for 30 years, I am a very visual person and see the scenes play like a movie, then I write what I see and “hear.”

Often the chapters will seem unrelated in the beginning, but eventually the characters and events begin to intertwine. I don’t know the ending until I write it. This method helps keep it fresh and intriguing for me as a writer. If I had an outline and knew the complete story beforehand, I think I would get bored and possibly not finish it.

What can we look forward to from you in the future?
I am going further down the rabbit hole to reveal how we are being controlled by unseen forces, and yes, this includes beings from other planets. I am also focused on the world’s corruption and destruction of our planet, so there may be more stories similar to Earth Sentinels, or possibly a series. I just go with the flow.

Shaman Elizabeth Herrera is a healer and author who writes life-changing books. Her stories encourage people to stretch outside their comfort zones and reexamine their own beliefs.

Elizabeth was raised in a Christian home, but lost her faith in her early twenties. For over a decade, she searched for something to fill the void, eventually discovering Native American spirituality (shamanism). Through this spiritual practice, she unexpectedly became a catalyst for healing and miracles. These events led her back to a belief in a higher power.

Her great-grandfather was a full-blooded Apache, who raised her father. She was fortunate to know her great-grandfather. He smuggled sugar and flour from Mexico into Texas, exchanged gunfire with Texas Rangers and crossed paths with Pancho Villa.

She is the author of Shaman Stone Soup, Dreams of Dying and Earth Sentinels.

Born and raised in Michigan, she now lives in North Carolina with her family.

Giveaway : There's 2 separate giveaways below, one for US and one for INT :)

Enter to win 2 print copies of Earth Sentinels (US only)