Ellie Walker is a high school senior who commits suicide and then is forced to face the brokenness she leaves behind.

1.
Death,
You aren't a tunnel of light, a choir of angels, or even an ascension of the soul. You are a twitching leg, a spasm of breath, a moment of fear when I realize that the noose I tied didn't snap my neck and I am left dangling with the chair tipped over too far from my toes. You are blackness blotting out my vision, my lungs heaving in breaths that aren't there, because the rope cuts into my throat choking the life out of me, slowly.
Too slowly.
My fingers claw at the rope that I found in the closet behind liquor bottles and expired cans of vegetables. Life seeps out of me; the oxygen choked out, the carbon dioxide choked in. Where was the peace and quiet? Where was the release? The absence of fear? That is why I hid the rope under my mattress, why I waited till mom and dad left for work, why I climbed on a chair and tied the noose, why I wrapped it around my neck and pulled it tight, said a prayer, squeezed my eyes shut, and stepped off the chair.
Leaving the screams, the bruises, the scars, the secrets and loneliness behind.
But you aren't taking me away.
I am suffocating in silent screams and the smell of ash. The floor is too far and I am too high. My chest caves in and just as blackness eats my last sliver of being conscious, I realize I regret. I realize I am too late. Death, you aren't beautiful or free or romantic like in all of the novels I have read. You are a girl who had no hope left, dangling from a ceiling beam who, two breaths too late, realized she wanted to live.
I thought you would save me, Death.
But you are a liar.
Just like everyone else.

The Day He Died...
A Message from the Author of Two Breaths Too Late.

He was about 6 when I met him. He was my new friend's younger brother and all long limbs, brown hair, and big brown eyes. He had one of the biggest smiles I had ever seen.

The kid was brilliant. He read constantly. Loved learning. By 11, he was taking college classes. Languages. Science. His mind was a powerful beast that conquered many subjects. We all knew he would do amazing things with the brilliance he had within him.

He would shine. He would soar.

We were all ready and waiting to see it happen. We all grew up. I went to college. Gradated. Got married. He became a handsome teenager and was still wining over hearts (everyone loved him and that big smile). He joined a church band. Got his associates degree before 15. He had friends and a family who loved him.

Then one night, he ran out of his house—his parents running after him—to the bridge that went over highway 95...and jumped.

As a mother, I can't imagine that moment—that split second when you are looking at your child and his feet are solidly on the ground and he is so close to being within reach and that defining, heart breaking moment when he isn't any longer.

I heard the news by phone while standing in my kitchen. The shock rendered me breathless. What had happened to this brilliant young man? We found out later that he had been recently diagnosed with schizophrenia and after watching his brother have a fierce battle with the illness, he couldn't find the hope to live on.

His family had everyone wear brightly colored shirts and his band played at the funeral. The music was joyous and beautiful and people hugged and danced as pictures of his beautiful smile were projected onto a huge screen.

It had been the week of Easter. It was a beautiful celebration of his life—a life that ended far too soon.

We have all suffered loss in some way. We know the ache. The feeling of too much space because something or someone is supposed to be there to fill it.

The loss of someone to suicide happens everyday. Every minute. It is estimated that worldwide nearly a million people take their own lives. One million fathers, mothers, sisters, brothers, sons, daughters who are lost because they had no hope left.

The day I found out about this brilliant young man's suicide, I was brought back to a moment years earlier, when I was 11 years old and standing on a chair with a noose dangling in front of me. I had stepped down from that chair that day—despite bruises, pain, loneliness, and secrets—and lived. Lived to see heart breaks, awards won, graduations, friendships, jobs, and a million other happy and terrible moments. Ugly or perfect, those moments were mine and there I stood in my kitchen with my round and pregnant belly and listened as my mother told me the news about a boy who had all those moments taken away.

Almost a year ago, I posted a flash fiction piece I had written about suicide and a reader contacted me and said that I should write a novel based on it. I was intimidated. Scared. How could I take on something like that? It hit such a personal chord with me that I thought I might unravel in its creation.

I am not going to lie. This novel always brings tears to my eyes. Not because I am a literary genius or a masterful story-teller, but because with every word I write and second that passes, I know there is someone out there who is deciding to give up on on their beautiful and terrible moments and my heart breaks and I wish I could type faster, or yell louder, or reach out and squeeze every single one of those one million souls and whisper, “Hold on...just a little longer.”

This novel isn't about happy endings. It isn't about happily-ever-afters. It is about the beautiful and terrible moments that make up a life and the possibilities that live in even the darkest of places that sometimes we are just too blind to see. I will use a portion of the proceeds from this novel to donate to To Write Love On Her Arms as well as launch a suicide prevention project entitled, HoldOn2Hope.

The project will launch in September. If all goes well, there will be a LIVE event for teens in the DC metro area as well as the project's online media awareness component will last a full year. My heart is in this project and I know that a project like this needs a ton of love and support to thrive.

That's where you come in. I hope together we can change this staggering statistic. I send you love and light today. Please know that you are precious in this big 'ol world and it would not be as bright or beautiful without you in it.
XOXO,
Rochelle 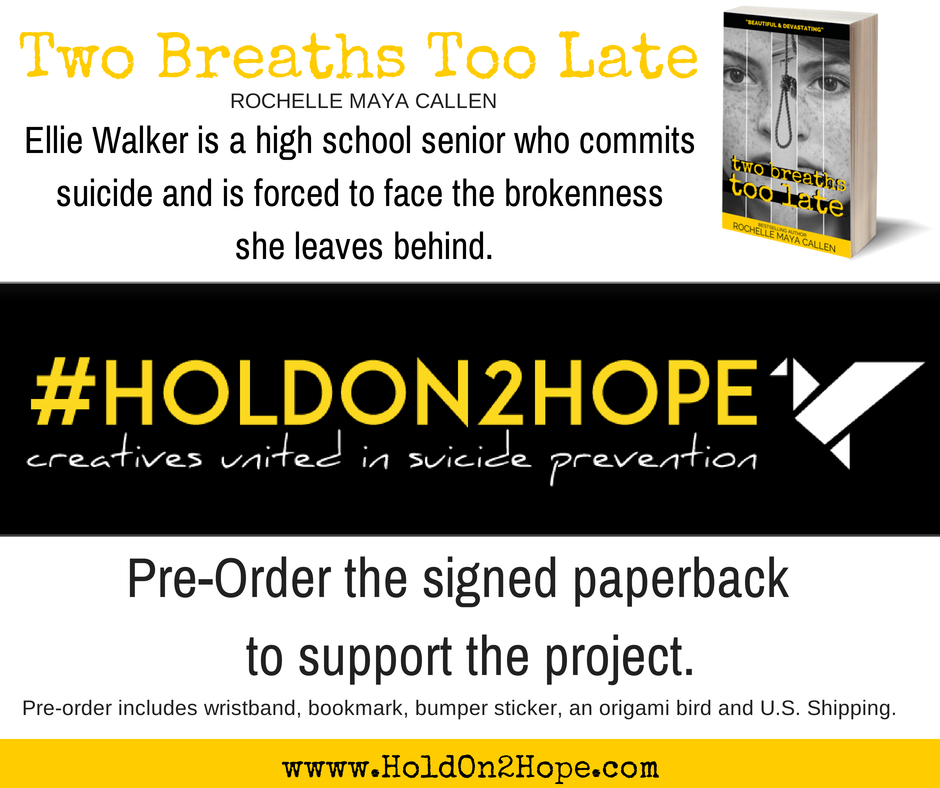