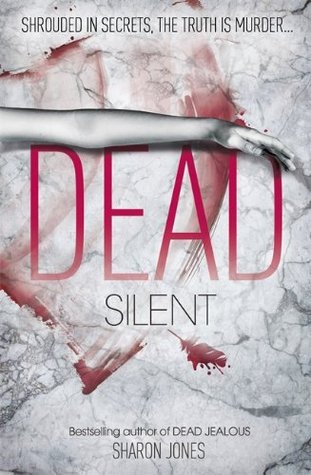 A snow angel etched in blood. An elite society. A secret dying to get out.​The second Poppy Sinclair Thriller.When Poppy Sinclair and her boyfriend visit snowy Cambridge, she doesn't expect to discover the body of a student - arms outstretched in the act of smearing bloody angel wings on the chapel's floor.Suddenly, Poppy is faced with the possibility that the one closest to her heart might be the one committing the most malicious of crimes.Dodging porters and police, dreading what she might find, Poppy follows the clues left by a murderer bent on revenge...Long-hidden secrets are chillingly revealed, an avenging angel seeks forgiveness and red-hot vengeance must be quelled in the amazing new Poppy Sinclair thriller.

I headed into Dead Silent completely unaware that it was the second book in a series, but the initial set-up was done in a way that meant I didn't actually realise I was reading a second book until I spotted its listing on Goodreads. On top of that, the relationships were solidly displayed to begin, leading to no confusion on that front.

However, I still ended up putting this title aside at 69%, when I realised I didn't actually care enough about the characters to find out how their story played out. I tried to figure out when, exactly, in the book this lack of connection began to kick in, but couldn't quite pinpoint it. Nor could I totally identify what it was that had caused my loss of interest. Because, to begin, I really enjoyed the fairly eccentric relationship between Poppy and Michael—until it began to seem inconsistently portrayed between their inner feelings and outward behaviour. Not to mention Poppy’s ridiculously stupid behaviour, often showing total lack of consideration for others—which only made her less and less likeable as the story went on.

There were a couple of other niggles, too—like her dad cussing the way he did, when he hadn't cussed at any other time and was supposed to be a man of God … and the constant use of OK over okay through dialogue and narration, which grated on me more and more each time I read it.

And then there were the students of the university, with their extreme attitudes and behaviour, and I couldn't help but think how terribly stereotypical it had all been made, to the point of losing any authenticity that could’ve helped hold this story together.

However, all of those complaints aside, I did read to 69%, so Dead Silent obviously must have some redeeming qualities, as it held enough intrigue for me to reach there. So, will I pick it up at another time and try to finish? Maybe. Maybe not. But don’t let my views deter you, because this story might turn out to be right up your alley, even if it wasn’t up mine.