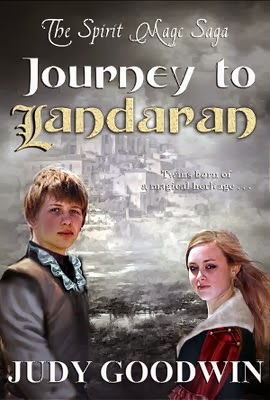 Aidah begins seeing visions through her brother’s eyes. He’s a Firestarter, gifted with the Talent to control light and heat, destined to become a Sun Mage in the great city of Landaran. But he doesn’t want to leave without his sister. As storm clouds gather, Aidah dreams of a beautiful man, a frightening man, calling to her. She fears the truth. That she may developing a Talent of her own, one that will change their lives forever. The power to read minds. To possess bodies. To travel inside dreams. In the world of Ernid, Spirit is the ultimate power. Nations will go to war over them.

Standing by the bed was a man, the same man from her earlier dream. Her breath caught in her throat. He wasn’t merely handsome, he was beautiful. Long blond hair just touched with sandy brown at the roots flowed down broad shoulders and a well-muscled torso. He was dressed in a black leather jerkin and red hosen and shirt. She looked to his gray eyes the same color as hers, but there the beauty ended. They were cold, hard as granite, staring down at her.
Then he smiled, and the hard features softened somewhat. “Aren’t you a pretty sight. What is your name, my dear?”
She was dressed in the clothes from the mountaintop but she felt naked somehow, vulnerable. “Aidah. Aidah Dernholt, sir,” she responded uncertainly. Was this real or a dream? Everything seemed to be vivid in color and detail, yet she couldn’t hear any noises from the window or from the door leading to the kitchen. Where was the rest of the family?
The man chuckled. “Do not fear. You are not asleep, but neither are you awake. Consider this a trance where your mind is awake but your body rests in slumber. Your Talent has called me here to visit you.”

Most Common Mistake in Writing a Fantasy Novel

Everybody loves fantasy, right? What could be better than dreaming up a tale with flying horses, magical swords, maybe a dragon or two? And what better job than to write about these mythical places, to basically get paid for daydreaming?
It’s actually not that easy. Fantasy can be one of the more challenging genres to write, because of all that freedom. Without structure, readers won’t be able to believe that your world is real. And without that, they won’t care what happens.
So here, briefly, are the top five common mistakes when writing a fantasy novel:

1.      A typical world
It’s easy to slap together a basic European medieval setting with knights and dragons and trolls and outfits you saw at the local renaissance festival. It’s harder to make your fantasy world stand out.
In my first book, Heart of the Witch, I decided I was so sick of typical fantasy settings that I placed my book in a colonial period of around 1620 complete with religious fanatics and witch burnings. Then I placed the colony in the Southern hemisphere—Australia, to be exact. For Journey To Landaran, it looks typical, but there are hints of lost technology (space travel?) and other cultures, like the Gedar who resemble medieval Tinkers or gypsies.

2.      Magic without a price
Tension is vital to any book of any genre. If things are too easy and you know the good guys are going to win, why bother reading? This is why magic has to be handled with care in any fantasy book. It should have clear rules and limitations. Power always comes with a price, and the higher the price, the greater the tension.
In Journey To Landaran, the price to power is fame, (or infamy) and responsibility. Nations scramble to snatch up any person “lucky” enough to possess a Talent, and immediately draft them into their armies.

3.      Too many facts!
I just said that world building is important. However, this doesn’t mean you need to tell your reader EVERYTHING about your world all in the first chapter. Let them discover things a piece at a time. The story should begin with story—action. Not background, not legends, and not the entire political makeup of your world.

4.      How do you say that name?
Names in fantasy can be tricky. Unless you’re writing a contemporary urban fantasy, you probably don’t want common names like Bob or Sue. But don’t go crazy. Calling your orc Gzzhyedl is just going to make your readers crazy.
I like to use my “Baby Names Around the World” book to help me name my characters. What might be common in Japan or Finland may not be so common to English readers. For example, “Tavish” means “twin” in Irish Gaelic.

5.      And then eagles came and flew them away . . .
Unfortunately you see this a lot in fantasy—some ultra-powerful wizard or a new amazing ability or fantastic object saves the day. Tolkien was even guilty of this with those darned eagles! Be careful that it is the actions of your hero or heroine that drives your plot, rather than some other force.

If you’d like to hear more about writing, fantasy, or my books, please stop on by my blog. http://judygoodwin.wordpress.com I also do occasional book reviews or general musings about life. And teenagers.

Judy Goodwin has been writing since she was a child, when her fourth grade English instructor told her, ‘You should be a writer.” She earned her Bachelor of Arts degree in Creative Writing from the University of Arizona, and a Master’s in Education from Argosy University. Over the last ten years she has appeared in several small press magazines and anthologies with her fantasy and science fiction short stories and poetry. Her first novel was published in January 2013, entitled Heart of the Witch.

When not working on her fiction, Judy works as a technical writer in a healthcare services firm. She enjoys bullying the sheriff at the local renaissance festival, volunteering at local charities, and catching up on the latest movies. She lives in Gilbert, Arizona with her partner and teenage daughter, four cats, and three small dogs.