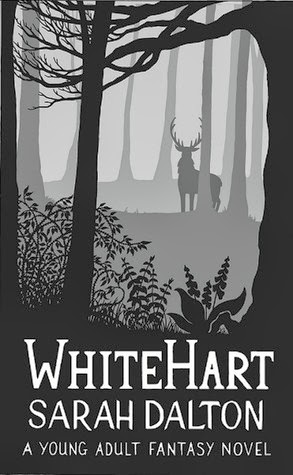 Synopsis:
Mae never asked to be craft-born. She never wanted that burden.

The realm needs magic again, and the the King of Aegunlund has been waiting for the first craft-born girl to marry his son, Prince Casimir.

In Mae’s town of Halts-Walden, the ambitious miller claims his daughter Ellen is craft-born. Mae knows this is a load of hogwash, but she’s glad Ellen will have the unfortunate pleasure of becoming queen instead of her. All she has to do is sit back and wait until Casimir and Ellen are married, then she will finally be free of the threat of her fate. But on that day an event so shocking and terrible occurs that Mae finds herself entering the neighbouring cursed forest on a quest she never thought she’d have to follow.

Join Mae as she rides her white stag through the Waerg Woods with a pampered prince at her heels. She’s out for revenge and nothing, no one, will get in her way.

Mae Waylander – She lives in the village of Halts-Walden, in the fictional world – Aegunlund. It’s an idyllic village, a place where settlers came to escape many wars ravaging the realm, a place to live in peace. Mae lives with her father, Robert Waylander, a poor man who has been hurt felling trees for wood. Mae’s mother died birthing her, but on the day she was born, a white stag appeared at the window of the hut. That white stag has followed her ever since, becoming her faithful friend.
Next to Halts-Walden stretches out the Waerg Woods, a mystical forest of darkness, where remnants of the Ancient magic has twisted the land into a dangerous, monster-infested place. Mae’s mother came from the Waerg Woods. Mae and her father are the only people from the village who are brave enough to enter. But their bravery is construed as wickedness by the other villagers. Mae is shunned, called cursed, and treated badly by those around her.
But she has a powerful secret. Mae is craft-born. The blood of the Ancient Ones runs through her veins. The magic lives inside her, and she is special.

Prince Casimir – The crown prince of Aegunlund comes to Halts-Walden by the order of King Aldrych. He is to marry the craft-born so that the two of them can reignite the magic in the realm.
Casimir is nervous but excited about meeting his future bride. He hopes that she is beautiful and graceful. He hopes that he can impress her with his skills as a hunter and a swordsman. Most of all, he hopes that she will not prefer his brutish younger brother, like his father does.
Casimir finds more than he expected in Halts-Walden. He finds freedom. But that freedom comes with a cost. Casimir will have to grow up very quickly if he is to survive the Waerg Woods.

Ellen Miller – All her life her father has told her that she is meant for greatness. She is the most beautiful girl in Halts-Walden, with snow white skin and black hair. One day she discovers an amulet. It seems like a regular trinket. But soon she discovers that she can perform small magical actions, like darkening the leaves of an ivy plant with her touch.
The miller sees his daughter perform magic and spreads word through Aegunlund that his daughter is the craft-born. Before she knows it, Ellen is being introduced to her future husband – Prince Casimir.
Ellen swallows her doubts about what she has done. But before she has time to come to terms with her new future, she is kidnapped and taken into the Waerg Woods by men the locals call ‘Wanderers’, men who steal from the people at Halts-Walden. Bullies who frighten the children and rough up the tavern goers.
Ellen has to remain where she is, completely helpless, until someone can rescue her. She can’t let the others know the truth. They can’t find out that she is not the craft-born after all.

They call me White Hart because on the day I was born—the day Mother died—the white stag appeared at the window of our hut, just a calf back then, so Father says. He tried to shoo it away, but the stag kept coming back, staring through the window, watching me as a baby. When I could talk, I yelled, Anta! Anta! I pointed at the large, furry antlers from his head, standing tall and crooked like the branches in the Waerg Woods.
No one knows why Anta stayed with me, or why he let me tame him. I ride him, too, and he drags the cart of wood to market. They whisper behind us, That’s no place for a white stag. What did they do to the creature? They have no right to own an animal like that... and more than once Father has had to threaten those who come to our house late at night, desperate to poach Anta for his fur. I’d never let anyone hurt him. I’d kill anyone who tries.

Sarah grew up in the middle of nowhere in the countryside of Derbyshire and as a result has an over-active imagination. She has been an avid reader for most of her life, taking inspiration from the stories she read as a child, and the novels she devoured as an adult.

She is the author of the popular YA dystopia series 'Blemished' and the gothic novella 'My Daylight Monsters'. Her latest series is called White Hart – a YA fantasy about a girl who hides magical powers from everyone around her.