The Recruit by Robert Muchamore Review! 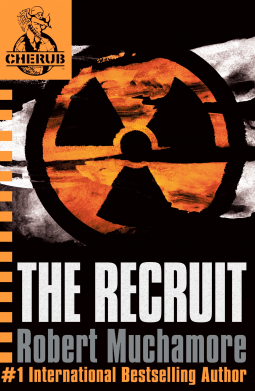 
Number 1 bestselling series, CHERUB celebrates its 10th Anniversary with brand new covers!
Now is your chance to start right back at the beginning with The Recruit.
A terrorist doesn't let strangers in her flat because they might be undercover police or intelligence agents, but her children bring their mates home and they run all over the place. The terrorist doesn't know that one of these kids has bugged every room in her house, made copies of all her computer files and stolen her address book. The kid works for CHERUB.
CHERUB agents are aged between ten and seventeen. They live in the real world, slipping under adult radar and getting information that sends criminals and terrorists to jail.
For official purposes, these children do not exist.

My Thoughts :
James mum is a thief. He wants for nothing and has everything. He is very smart but doesn't bother using it. He accidentally hurts a girl and gets in trouble when his mum suddenly dies. His sister is placed with her father and James is placed in a childrens home. He gets involved with some bad kids in the home and is heading for more trouble when he gets sent to see a doctor. Next thing he knows he wakes up in a strange place. He is told that it is a training center for CHERUBs, young spies. He is offered a place because he is smart and the kind of person they want but is told it will be tough and he has to stick to the rules or else. He accepts and from that moment his life changes!
I've heard of this series before but haven't read it. The premise sounded awesome. Kid spies!!! While I did enjoy it, there were a few things that annoyed me. I'm going to get the bad stuff out of the way first.
What I didn't like:
I found it hard to connect to James. At the start he is like a spoiled child, he losses his temper with a girl in school and slams her against the wall. Then he shoves his teacher and causes her to fall!! He gets into trouble alot and is just all round a thug in the making. He is ashamed to be seen with his mother because she is fat. He wasn't easy to like but saying that he did grow on me. I still didn't like him but I didn't hate him either.
The first half of the book was so slow. He didn't get to the CHERUB faculty till then and he was so dislikable in the first part that I wasn't going to keep reading.
Jamess' mission. It wasn't as action packed or as good as I would of liked.
Now what I liked!!
The concept of the CHERUB facility was awesome. Kids trained as spies because adults wouldn't suspect them. They get to use cool gadgets, travel the world and become something special, so what child would turn it down. They have an intensive 100 day training course that pushes them to their limits. Each stage of training has a different colour shirt with Black being the highest.
The book really takes off in the second half, mostly. From the training till James first mission it was action packed, fast paced and intense. The missions they do are dangerous so they have to be prepared in every way. They still go to school and have to learn different languages, self defense etc. I really enjoyed that part of the book.
Overall its a solid start to what I imagine is a good series. I'm not sure if its for me because the MC was so unlikable but I do think that it would appeal to teenagers.