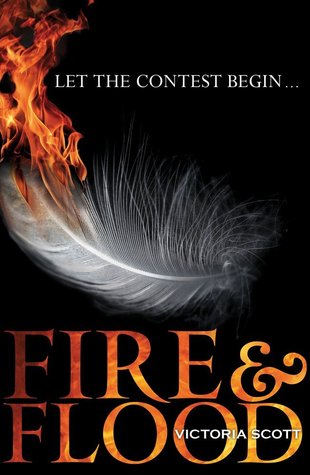 A modern day thrill ride, where a teen girl and her animal companion must participate in a breathtaking race to save her brother's life—and her own. Tella's brother is dying. He's got cancer, and Tella is helpless to save him. Or so she thought. When an invitation arrives for Tella to compete in the Brimstone Bleed, a deadly competition that will lead her through treacherous jungle and scorching desert, she doesn't think twice. Because the prize is a cure to any illness. But Tella will be facing more than just the elements.


Fire & Flood by Victoria Scott arrived in my reading pile during somewhat of a reading slump I was experiencing, as in it was taking me a week-ish to get through a single title (sometimes more). But when I picked up Fire & Flood and started reading, I very much didn’t want to stop. So, immediately, I was excited, because it’s been a while since a book has made me feel this way.

Now, if I’m honest, to begin, I kept comparing it to other titles in its genres: The Hunger Games, Divergent (though not for long), as well as titles in the sci-fi crossover like Maze Runner and the like. However, the more I read on, the more it came into its own and, by the end, I realised just how much of its place it deserved amongst these other great titles, because despite the similarities,Fire & Flood is still unique.

Onto the characters, we first have main character Tella. To begin, she comes off as quite self-centred, though if the reader is paying enough attention, they will see the peeks at how she truly feels about her family beneath the attitude—and even more so when she races off to an event she knows zero about for the mere chance of saving her sick brother. From there, her character development only goes up in the reader’s estimation. From start to finish, I connected with this well-developed and authentically-voiced teen.

Next to her was Guy. Le sigh. From the off, this dude had my attention, despite him coming off as a bit of a tool. However, I didn’t let his initial impression cloud my judgement, but trusted the author to show me what he was really all about beneath the brood and brawn. And I loved how we weren’t slapped upside the head with it. How his need to protect combined with his unwillingness to divulge meant we got drip-fed his story, and even then didn’t grasp the full extent of it until right at the very end.

These two combined, with what Guy has planned? The next books are gonna be formidable.

And around this duo is the rest of the cast. From irritating and self-obsessed bully, to tough girl, more mature-in-age contender, young and seemingly too naïve to be there young guy, and very likeable twins in the first round. Not to mention the new additions—and new revelations—in round 2, on both sides of the playing field. Because I very much liked the twist on a certain one of the characters, even if I did have my suspicions on that front from very early on.

Plus, on top of the cast, we have to mention the Pandora’s. I loved these. Loved what they added to the story. Loved how one that seemed almost faulty surprised everyone with its kick-a$$ery. More so, though, I loved how they each had special traits that didn’t necessarily tally with what they were on the outside, and how they surprised me each time we discovered a new ‘skill’ from them.

So, yeah, great plot, great storytelling, and great characterisations—all from an author who’s not afraid to kill people off. Now, ring the bell for round 2 (or 3, to be pedantic) already! Because I am definitely ready to head in.