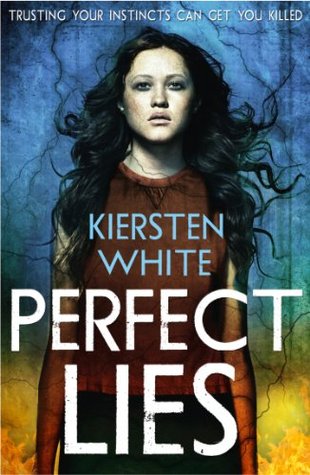 The wickedly smart sequel to Sister Assassin – a tale of two sisters trapped in a web of deceit.

First they made me kill.
Then leave behind the one person I love.
Now I’m getting even.
Annie and Fia have battled to survive within the sinister Keane Foundation for years, using their powers to defend each other. Now the sisters have allies; friends who might help them escape.
But Annie's visions of the future are never certain and Fia's flawless instincts can't always tell her who to trust. With only each other truly to rely on, their extraordinary gifts may not be enough to save them…
My Thoughts :
This is book 2 so there will be spoilers for book 1!! I finished this book about 3 days ago and its taken me this long to figure out what to say about Perfect Lies. After Fia faked Annies death and left she feels freer. Annie though is still waiting for Fia to come back. She is trying to make a go of it with the Lerner group and do all she can to bring down the Keane Foundation.
Fia mean while has her own plan. She and James are trying not to think of the plan to takedown Jamess' father so the Readers can't see. She is trying to become indispensable so as to get closer to Keane and earn his thrust.
Im not going to say much more about the plot because of spoilers but I will say that this was much better than book 1, more action and suspense.
Annie in this book was a lot better. In book 1 she was meek and always relied on others but thankfully in Perfect Lies she start to realise she needs to take action. She wants to train in self defense and wants to get involved more with Lerner. She pushes her vision to the max since she is the only one able to see Fia but what she sees terrifies her. Fia seems to be descending into something Annie doesn't know.  I really liked the fact Annie grew and became so much more than she was.
Now onto Fia. Never have I read a character that is so complex, unique and disturbing! Reading her thoughts was like ... I don't even know how to describe it. Her thoughts go a mile a minute and never stop. In book 1 we see how broken she became because of what she was forced to do but in Perfect Lies she is no longer the strong girl who is broken, she now seems to be right on the edge of insanity. She is so erratic and beyond broken that its hard to see her ever becoming Fia again. Her thoughts are constantly dark and dangerous and she doesnt seem to be able to thrust her instincts anymore. She finds it hard to tell right from wrong. My heart broke for her!!
James! Oh James, you changed so much in this book and not for the better!! He was so considerate and nice in book 1 but now he seems to be turning into his father. He seems to care for Fia but we never can tell if its true or not. He is keeping secrets from her and seems to manipulate her any chance he can get, no matter the consequences to Fia. I so didn't like him and my poor heart broke again for Fia.
Overall Perfect Lies was an impressive sequel. We get more of everything, more action, more Annie, more suspense and more intrigue. Its like nothing Ive read before and can safely say you should read it. While the writing style takes a while to get used to, the way the author can make you feel the damage done to Fia is amazing. You really feel for both girls but especially Fia. She has so many flaws and is so damaged but you still find yourself rooting for her and hoping she finds happiness. I loved that it had Annie and Fia POVs because you can see how much they mean to each other and their bond is so strong. For such a short book it definitely packs a punch.