Constructing Us by C.J. Lake Book Blitz and Giveaway! 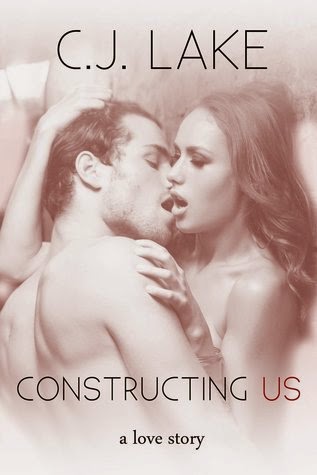 Synopsis:
*Contains explicit/steamy scenes that are intended for mature readers.
When Andy takes over the lease on her friend Ethan’s apartment, he warns her about his roommate, Tragan. According to Ethan, Tragan Barrett is self-centered and often inconsiderate, caring more about hanging out with his friends and hitting the local casino than straightening the living room or keeping up with his laundry. Andy isn’t too concerned, though, because she isn’t moving in to make a friend.
Intended as a short-term living arrangement, the apartment is close to the hospital where Andy is participating in a drug study for a rare disorder she was diagnosed with when she was twenty. Now, fresh out of college, she is trying to figure out her life–and also how to live with the uncertainty of her condition. Figuring she’ll go one way and he’ll go another, Andy is surprised to learn that Tragan is not exactly the way Ethan painted him. In fact, there’s a whole other side to the darkly sexy construction worker…especially when it comes to Andy.
Can an unlikely friendship turn into something much more?

“So this is Brad’s study?” Tragan clarified.
“No, no.  It’s run by a doctor he knows, Dr. Lassiter.  Brad has nothing to do with it.  Except that he told me about it and convinced me to do it.”  Setting down her sandwich, Andy spilled out what sounded like a resigned sigh.  “Honestly, I’ve been thinking of telling Brad it’s over.”  Immediately, Tragan’s pulse quickened.  Could she really mean…?  “You know, with the drug study,” she clarified.
“Uh, right, the drug study,” he said, nodding, mentally kicking himself for thinking it could be that easy.
“I just want to forget the whole thing and get on with my life.  Actually, I’m thinking of going back to school to get a master’s degree.”
“You mean here in Boston?”  Tragan tried to make the question sound casual, tried to cover the dread he felt at the idea that Andy might be moving away.  Before she could respond, the ear-splitting shrill of the fire alarm shattered the moment.
“Aah!” Andy yelped, throwing her hands on her ears.  “What the hell?”
Tragan waved off her concern.  “Oh, that’s just the fire alarm in the building,” he said.  “Don’t worry about it.”
“Come on,” she said briskly, hopping up from her chair.  “We’d better go.”
“Nah, I never bother going down for that.”
“What do you mean?” Andy said, sounding bothered.
“Well, it goes off occasionally, but it’s always a false alarm.  So I usually just ignore it.”
“What!  Tragan, that’s crazy.  You can’t just ignore a fire alarm.  It could be something!  I’m sorry, but that’s really immature,” she told him, her expression solemn.
“Damn,” he said, feeling mildly chastised as he stood up.  “I’m immature now?”
“No, I mean…I guess that’s harsh,” she admitted.
“Are you pissed at me over this?” he said, walking closer to her.
“Of course not.  It’s just--”
“What, you’re worried about me?” he asked with a trace of a grin and stepped even closer, leaving their bodies only inches apart.
Andy appeared momentarily flustered, swallowing and sort of flitting her eyes from Tragan’s mouth to his chest to his shoulder, like she didn’t know where to look.  “I’m just saying: what if I wasn’t here?  And there was a fire and something happened to you?  Obviously that’s what I’m getting at.”
“Okay,” he relented.  “I’m sorry.  I’ll go.”
“Even if I’m not here?” she pressed.
“Yes.  I’ll go,” he promised.
Which earned him a small, grateful smile.  “All right, come on then...” she said with a quick tug on his arm.
“Hey…” he said, stilling her for a second then impulsively brushed a lock of hair away from her cheek.  “Nothing’s going to happen to me.”


Andy’s eyes locked with his.  Their gazes held for what felt like a meaningful moment, as her mouth curved open and she nervously wet her lips...

C.J. Lake is a storyteller who is passionate about art, surfing, and skiing/snowboarding. Residing near the coast of Massachusetts, C.J. is working on a new book that will feature Tragan Barrett's friend, Matt Winter. Readers can get in touch via email (writercjlake@gmail.com), or follow C.J. on Twitter @brightbluesurf.