Debut Author Bash : Rise Of The Known by Jane Lively

Welcome to the Debut Author Bash hosted by YA Reads! Check out the schedule because there are some amazing Debut Authors on there and it is my honour to introduce Rise Of the Known by Jane Lively! 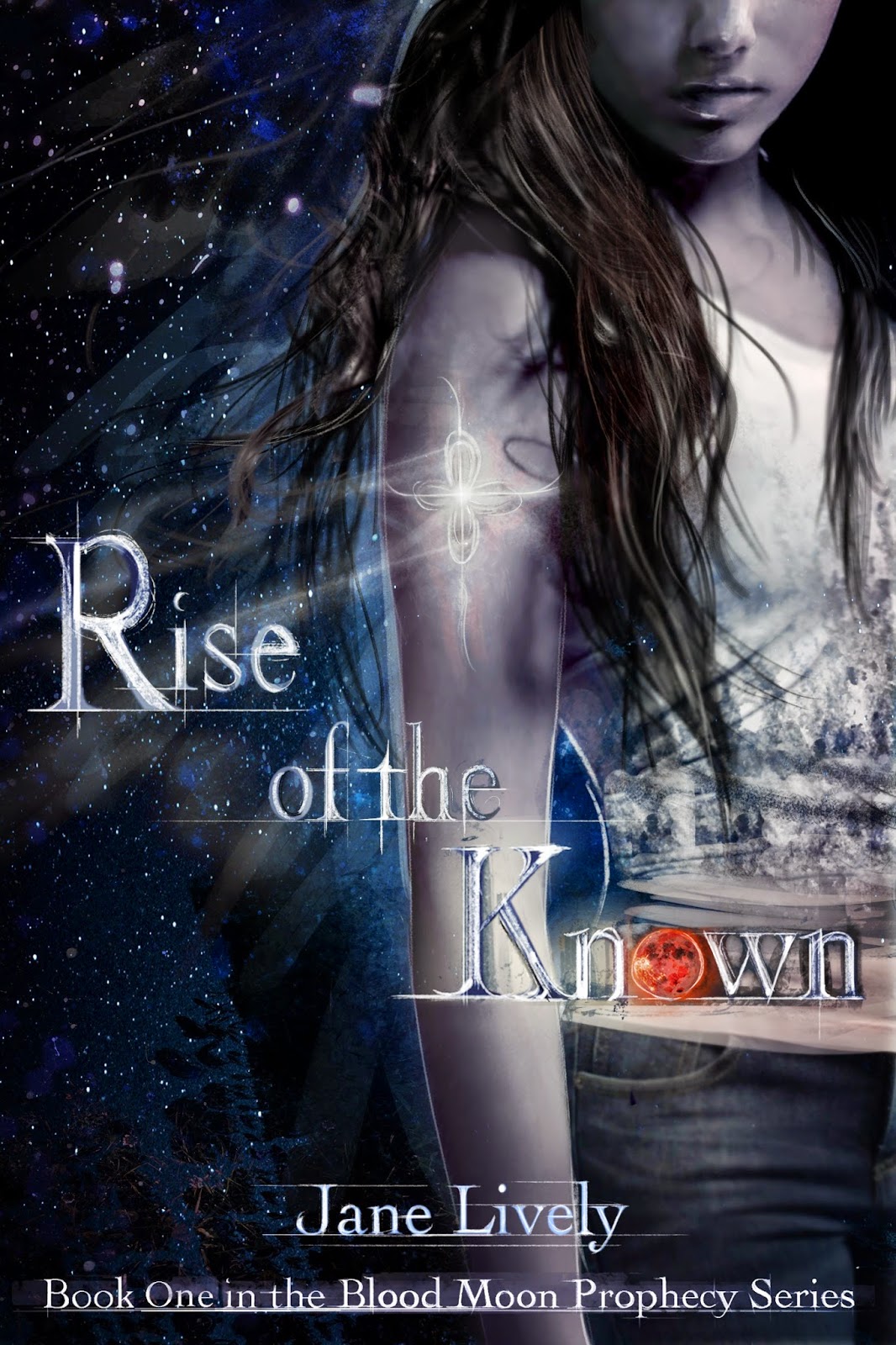 “The most common way people give up their power is by thinking they don’t have any.” – Alice Walker
Blurb/Synopsis:

Quiet, unassuming Alexie Lambis (Lex) is a seemingly ordinary small-town girl with typical teenage problems: an overbearing mother, a crush on a guy way out of her league, and a best friend who gets into trouble like it’s her job.  Having to also single-handedly organize the Senior Class Blood Moon Dance has Lex convinced that her life couldn’t get more problematic.

That is, until the night of the dance, when the Blood Moon rises.

The rare celestial alignment leads to a breach in the barrier between the human realm and the Nether—the darkest of the Shadow realms.  As Nether demons begin crossing over, the threat triggers a thousand-year-old Prophecy—the final safeguard protecting the Prana people, a race of immortals who sought refuge in the human realm.  For a millennium, the souls of the Prana people have been hiding inside human hosts from the one who seeks to destroy them—the Nether Lord, Rhezden.

Suddenly, Lex is thrust into the Prana world of magic, runes, and deadly demons when she discovers she is The Known—host of one-half of the soul of the Prana Queen.

As the only one who can defeat Rhezden, the fate of the Prana rests with their Queen.  But in order to reincarnate, her two halves must first reunite.  The Queen’s second half resides in The Unknown, whose whereabouts are a mystery and whose identity is concealed even from the Queen’s Guardians.  Much to Lex’s dismay, he is also fated to be The Known’s “beloved.”

Until The Unknown reveals himself, Lex must protect the ones she loves from Rhezden by pushing them all away—most painfully her best friend, Cam.  Lex must somehow push aside the guilt of knowing Cam feels abandoned by the only person in the world she trusts.

To bear her burden as The Known, Lex is forced deep into the surreal world of the Prana to learn more about the immortals, their Queen, and why Rhezden wants them all dead.  She meets the Elders—the Queen’s Council—who are charged with seeing the Prophecy to fruition and ruling the Prana people in the Queen’s stead.  But their open hostility toward Lex and their complicated political ties with the Queen make them questionable allies.

Things take an ugly turn when Lex is pulled back into her old world by a crisis—Cam has gone missing.  Having reason to believe Cam is in grave danger, Lex defies the Elders’ confinement orders and relinquishes their protection.  She strikes out on her own to save her friend, now fully exposed to the Nether demons that are hunting for the Queen’s halves.

It is not long before Lex is tracked down by the fearsome Moloch—Rhezden’s demon bloodhounds.  She is saved from a deadly Moloch attack by Degan, a dark, mysterious stranger who knows more about Lex than any stranger should.  With a shielded agenda, Degan takes her to a safe place where he heals her wounds.  Although he refuses to divulge his reasons for saving her, it becomes clear to Lex that he intends to protect her…by keeping her prisoner forever.

Determined to get to not let Cam down again, Lex somehow manages to escape from Degan.  But just as she zeroes down on Cam, a Moloch zeroes down on Lex.  Except this time, Lex is cornered, and she must face the demon alone.

Will Lex be able to defeat the mighty Moloch on her own?

Will she find Cam before it’s too late?


Will the identity of the Unknown be revealed, and if so, who will it be?

Purchase Links:  Not yet available  Rise of the Known will launch for sale in October 2014 on Amazon, B&N, Smashwords, Kobo, and iBooks

Excerpt:
Theirs was an unlikely friendship: Lex, the straight-laced do-gooder, and Cam, the rebel. But they were inseparable. Like opposite sides of the same coin—heads and tails linked inextricably at the core by some binding force nobody seemed to understand.

Excerpt:
Lex’s entire body shook. She swore she could feel each of her cells unravel and liquefy in turn. “The Queen made a mistake.” Her voice wobbled. “She chose the wrong person.”
For as long as she could remember, Lex had always felt as if everyone else were chosen ones: the beautiful, the talented, the athletic, the popular. Being chosen, even for kickball, was supposed to be something good. Something special. But she’d never thought about the other side of it—that being chosen comes with burdens. Heavy ones.
She sank to the floor.
Claramond closed the space between them and knelt next to her. She wrapped her arms around Lex’s small frame. “I believe in you, Lex. I believe you were chosen for a reason. It is your fate to save our people.” She squeezed her harder. “You’re destined to be a hero.”
Lex pulled away. She wrapped her arms around herself to quiet her shaking. “I don’t want to be a hero.”
Claramond gently touched Lex’s chin and turned the girl’s head toward her. Although she wore an encouraging smile, the old woman’s periwinkle eyes were stained with sad understanding. “Heroes never do.”
Excerpt:
The lunar eclipse was progressing. The Earth’s shadow crept slowly across the surface of the full moon, eating away at its yellow light. The redness bled across the moon’s face until it was a perfect sphere of glowing crimson, like an angry bullet hole shot through the dark flesh of the sky.
The night darkened by several shades. The stars and satellites dimmed until they were barely visible. The sky closed in on them, threatening to snuff them all out. The moon swelled and heaved, like a living, breathing thing. The red menace glowered, deepening the shadows of the landscape below it, creating a layer of darkness over darkness. A corona of clouds surrounding the moon became a veil of smoldering ash and cinder.
Suddenly, Lex winced. She clutched her head. A searing pain ripped through her brain like a hot, jagged knife.
Her head was splitting itself in two.
She heard a gasp—like the sharp, desperate intake of air by someone who was underwater for thirty seconds too long.
Against the backs of her eyelids, she saw an image flash. Two eyes flew open. Each time Lex blinked, she saw them—wide with fear and confusion at first, blinking rapidly and shifting from side to side.
Then, the blinking slowed, the eyes focused. Eyes that were intelligent and curious. Eyes that were a familiar shade of gray. Eyes that seemed to be staring straight at her.
And then they were gone.
Excerpt:
Like a slap to the face, a force from somewhere deep within brought her back to her senses. I can’t stand by and watch them die. I’ve got to fight for them. She unsheathed her dagger, ran to where the thick, purple-gray tongue slid across the ground, and drove in the blade.
The Moloch jerked its massive head and made a strange sound. The tongue released its grip on Kish and slithered back into the stinking cave of the Moloch’s mouth.
The demon fixed its empty eyes on Lex. It let rip an enormous roar and charged at her. Its massive body took to the air. A flash of light glinted off the razor talons that shot out of its claws. Instinctively, Lex threw her arms up in front of her face and closed her eyes.
Excerpt:
The sound of the glass hitting the cement clanged in Lex’s ears with the ominous certainty of a death knell. The wretched bottle rolled under the dumpster and out of her reach. For an eternity, its hollow clatter broadcasted to whomever, or whatever, was listening the fact of her presence.
Finally, the bottle hit some gravel several feet on the other side of the dumpster and came to a rest. Lex didn’t have to guess. She felt her last bit of hope float away, like a helium balloon escaping the grasp of a careless child.
She knew the creature heard the bottle fall. She knew it saw the bottle roll out from under the dumpster, like a welcome mat rolling out to greet it. She could feel the demon turn its ugly head toward the dumpster.
Her time was up.
She did not want to die like this—cowering pathetically behind a dumpster like a frightened mouse. If she were going to die, she would die facing her enemy.

Lex stood and stepped from behind the dumpster. “Here I am.”


I'm a small-town girl, living in the big city of Chicago with my trusty Boston Terrier sidekick, Duncan. I'm a cog in the corporate wheel by day, and a writer by night.

When I'm not working or
writing, I love cooking, laughing, yoga-ing...and, of course, indulging in my ridiculous obsession with writing stories!

I also write Romance under the name Avery Hale.

Amazon Author Profile Page:  https://www.amazon.com/author/averyhale  (I also write Romance under the pen name Avery Hale, and my author page on Amazon is for all my titles under both genres.)
Giveaway :

One eCopy of the book when its released or an ARC when available.