For the Love of Death by Tamara Rose Blodgett Book Blitz and Giveaway! 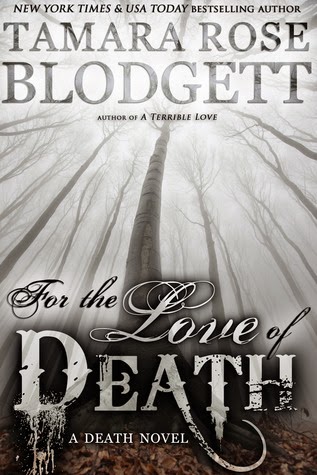 
The year is 2049 and in the new dystopian order, the Randoms have risen to the top like cream. Earth faces dire consequences because of the Helix Complex and their illicit use of mass-sterilization. Many who could have children, were made into mules from the virulent Zondorae concoction of 2030.
Now middle-aged, Death’s children do their best to move forward in a world where technology and paranormal powers collide in a mix of tragedy and circumstance. Zombies have been raised for the slave trade by those Randoms in power.
Paxton Hart and Parker’s twin girls are grown and on the radar for those that understand how critical they are for the future. The tight-knit circle of friends continues to network for solutions to the depravity that has taken hold.
Can the original group right a tremendous wrong? Will the new generation of Randoms find a solution for propagation, or will their power base cannibalize those who choose harmony instead of greed?

Did you read that title?
No one could love a zombie.
Well, I do. And so do a bunch of other peeps, apparently. Zombie fiction isn't all post-apocalyptic, disease carrying, mindless brain eaters. (Some of my zombies do get distracted by a tidy meal of brains. But that's for another guest post.)
As I write this, FOR the LOVE of DEATH is getting ready to blow up on Amazon for all the hordes of readers to descend and devour.
I'm all for that.
Is the Death Series about zombie love? Oh yes. But it's a bunch of other things too. It's dystopian. Dark fantasy ( a soft sort of horror, but horror nonetheless). Death is also suspenseful, witty and coming-of-age. My main demographic of readers is females ages 25-34. After that? It's post-60. Isn't that something? I never thought a teen male-POV would interest anyone except... you got it: a teen male-POV. Then Death got its teeth in the readers. Guys discovered it, middle-aged women (I'm one of those so no diss there, girls), teens and older people. Yes, I said elderly. They read and everything. (That's tongue in cheek, lest I get hate mail.)
What makes Death different? For starters, it's male POV. And there's just not much lit out there that is. There's even less from a teen boy's POV. I didn't know any better. I have four sons who complained endlessly about all the “drivel” of chicks who thought they could write like a guy thought.
So this chick thought: why not? It's certainly harder to speak from a teen girl's POV as there aren't any of them galloping around the house. I went for it, and the rest is history.
I thought I'd “grow” the teens through high school and be done at book six. But they kept talking, and readers kept asking for Death (I love how that sounds). Now they're all grown up with some kids of their own. It's a futuristic setting so I've taken liberties with some of the characters as you'll see if you begin the Death odyssey. I know it's a little weird, but my fave character is the MC's grandpa, “Gramps.” You ever meet anyone that knows who they are to the marrow? And they're simply indifferent to change or compromise? Filter-less? Yes, that's Mac O'Brien. And I simply can't seem to “retire” him. I also adore the MC zombie, Clyde. He died in a post-depression America and has not let his principles slide. He and Mac get along great.
I threw romance in Death #7, parallel earths, horror, action, comedic dialog, agony, drama and suspense. The pace is fierce (I guess I'm not terrific at slow pacing), and some resolution takes place, along with questions.
Does Deegan's zombie survive? Will Paxton save his Gram? Is Brad Thompson and his dad going to corrupt another earth through Zombie slaving? It's a new earth with the same problems. Where there's power, there is also greed. I had a terrific time writing Death. So much so, I'm already devising a Death 8. Since Death 7 is a spin-off; a case of the “stales” shall not be had.
Book one, Death Whispers, is currently in audio production and I have to say, it was in the top ten surreal experiences of my life to listen to my own words. What I really got out of listening is how mature DW is in some respects. It captures the changes teens experience on the chasm of near-adulthood. Death began as a YA crossover series and is now firmly in the new adult/adult genre. Fans of dystopian, hard sci-fi, paranormal romance, fantasy and action with snappy dialog should dig death.
If you're looking for a unique narrative, jam-packed with action and fast pacing, Death just might be for you. Especially for if you have a crush on zombies....

AUTHOR BIO
Tamara Rose Blodgett is the author of forty titles, including her NEW YORK TIMES and USA TODAY bestselling novel, A Terrible Love. Tamara writes a variety of dark fiction in the genres of fantasy, science fiction, romance and erotica. She lives in South Dakota with her family and is an ardent reader who enjoys interacting with her readers.
Author links:
http://tamararoseblodgett.blogspot.mx/
https://www.facebook.com/AuthorTamaraRoseBlodgett
https://twitter.com/TRoseBlodgett
https://www.goodreads.com/author/show/4755913.Tamara_Rose_Blodgett


--25$ Amazon Gift Card + paperback of For the Love of Death
Open to US/CA/AU/GB/UK; ends September 15th