The Hundred by Kass Morgan Review! 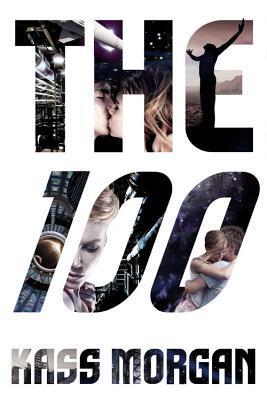 In the future, humans live in citylike spaceships orbiting far above Earth's toxic atmosphere. No one knows when, or even if, the long-abandoned planet will be habitable again. But faced with dwindling resources and a growing populace, government leaders know they must reclaim their homeland...before it's too late.Now, one hundred juvenile delinquents are being sent on a high-stakes mission to recolonize Earth. After a brutal crash landing, the teens arrive on a savagely beautiful planet they've only seen from space. Confronting the dangers of this rugged new world, they struggle to form a tentative community. But they're haunted by their past and uncertain about the future. To survive, they must learn to trust-and even love-again.

My review for The 100 by Kass Morgan is a difficult one to write because I seem to have very conflicting thoughts on it—making it fairly difficult to organise them into coherency. However, I shall give it a shot either way by breaking down the elements of the story.

Characters
I liked the characters. They all had their flaws, and they all had their strengths, and I enjoyed being in the four different POVs, which allowed the reader to see both the Earth and the space side of the story. Even Bellamy, who obviously has some kind of mental instability, is likeable in his own way, especially when the reader fully learns of his devotion to his sister. Clarke is possibly the strongest ‘voice’ in here, but she does seem to play more of a lead role than the others. Glass was good to connect with, because, hey, who doesn’t love teenage love worth sacrificing for? And Wells was … well, even though we know he sh** on Clarke (kinda), the author still made him extremely likeable, though that could be that his efforts to redeem himself helped with that. And then we have all of the characters who seem to play a lesser role, but obviously don’t because they’re the ones responsible for the 100 teens being down on Earth, responsible for the class systems up on the ship, and responsible for the decision made that could cost so many lives of those considered less worthy than themselves.

Settings & Writing Style
Yeah, this is where I have some of my conflicting opinions. Because Ms Morgan’s writing style is very basic and very simplistic in style, yet I can’t deny that this contributed greatly to the fairly fast pacing of this book and helps the reader to flow through the words with ease and few glitches. However, on the other end of the scale, the writing is so simplistic and basic that the story lacks decent descriptions as a forfeit. Other than Clarke, who has a couple guys doting on her and so noticing her looks, I reached the end with no idea what any of the main characters looked like, let alone the rest of the cast. Other than trees and sunsets, I have no idea what their particular section of Earth looks like, where they landed—no idea of the size of their camp, or how it was set up, who/what was placed where, what any of the trees looked like … and I felt exactly the same way about the ship. We were ‘told’ of the different areas, but never really shown them. So I’m conflicted, because it’s obvious it’s lack of ‘show’ which has made this a fast read, but it’s also the lack of ‘show that has taken something special away from the reader, which would’ve enabled me to immerse myself a little deeper and ‘see’ what was happening, had those descriptions been there.

Plot
This is another area I struggled with. I don’t know if it’s the multiple POVs that prevent more from happening within this book, or something else. Either way, that’s the problem: Very little actually happens. I mean, these 100 teens get sent to earth, and aside from a few rambles through trees to find something, and a bit of medicine being administered, and a couple of arguments I worried for a moment might’ve taken this into Lord of the Flies territory, not a lot happened for the bunch of kids down on the ground (until the end, but I’ll cover that in a moment). And then even up on the ship, where Glass told the tale, not a lot happened either—until right at the very end. However, these two events happening right at the very end only made me feel as though I’d just spent my time reading a very long/long-winded prequel. Because this didn’t feel like a complete story at all, but more like an introduction to the main point of it all.

That being said, I do want to see what the main point of it all IS, so I am going to read on—so I guess, prequel/full story/whatever this gets labelled as, it’s still done exactly what it set out to do, which is get my attention.