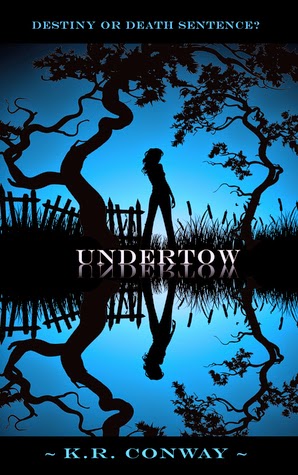 Luckless Eila is unknowingly the last of her kind: Rare. Gifted. Breakable. Stunning Raef is her kind's historic enemy: Soulless. Lethal. Lost. A legendary death 160 years before would set their lives to collide, forcing a beautiful killer to become a savior, a simple wallflower to become a warrior, and ruthless destiny to become a death sentence.

High school senior Eila Walker knows that good luck skips over her like an Easter Bunny on Speed. So when she inherits her grandmother's million-dollar Cape Cod home, she is downright shocked. And yeah, her new town isn't perfect: the cheerleaders are heinous clones, the local undertow can kill ya, and her Great Grams was supposedly fried by lightning in the harbor square. Still, Eila is hopeful her luckless days are in the past . . . until history decides to repeat itself.

A self-proclaimed loner and previous-social reject, Eila thinks she's hit the jackpot when drool-worthy Raef O’Reilly becomes her friendly, yet weirdly protective shadow. But being hauled beneath the waves by an unnatural undertow slams the brakes on bliss – especially when Raef storms to her aid with coal-black eyes and iron-like strength.

Eila, entirely freaked, demands an explanation and Raef comes clean, revealing that neither of them are average humans but rather the genetic remnants of an angelic pissing-match gone wrong. Eila supposedly can channel the power of human souls, while Raef is quite adept at stealing them. Even worse, the legend about her ancestor isn't such a myth, since Eila’s grandmother was one kick-ass warrior until her lightning-like power backfired. A power that is written all over Eila's DNA.

Now sought by Raef’s own family for her destructive ability, Eila must trust him to watch her back. But when a quest for information goes terribly wrong, Eila is suddenly left with only two options: become a weapon for the enemy or follow in her Gram’s fearless footsteps to save those she loves. Unfortunately she needs a willing enemy to ignite her suicidal energy and the only one she trusts has been guarding her butt and scorching her lips.

Mae appeared in the parlor doorway, her arms crossed over a stained plaid apron. “I need to talk to both you girls. Now, please.”
That didn’t sound very promising. I glanced at Ana, who gave me a curious look, but we followed Mae back into the kitchen where feast preparations were in full swing.
“Sit,” Mae instructed as she poured herself a fresh cup of coffee. She added some sugar and slowly turned to face us as she stirred the caffeine. The soft clink of her spoon against the cup seemed to echo ominously in the silent room. What was she up to?
“Um – did I forget to take the trash out or something?” I asked, daring a nervous glance to Ana. Mae cleared her throat, a sure sign of whatever she was about to say was not going to be enjoyable.
“Raef and Kian are lovely young men. They’ve helped me out enormously while the two of you have been laid-up, and I am very grateful for all they have done. However, what I am about to say is non-negotiable.”
Oh please – don’t say it. Don’t go there.
“Sex should be between two people that are in love and are mature enough to understand the ramifications of such an activity.”
Yup. She went there. I’d bet the deed to the house it was because Raef had been curled around me, too.
The color drained entirely from Ana’s face.
“Mae – you really don’t  . . .” I started, but she raised a hand to silence me. It was very possible I would never recover from this conversation. I was sure Ana’s ears were shriveling off her head as Mae spoke.
“I am not so naïve that I do not see how you four act around each other. It’s obvious that there are feelings that go far beyond friendship between you two and the boys. All I ask is that you girls are careful, use your head. Don’t do something you’re pressured into. And for heaven’s sake, if you are determined to do it, DON’T do it under this roof and always, always be protected.”
Silence descended on the room, as if a black hole had opened up on the table, sucking all gravity and sound from the kitchen. Mae stood there, glancing at the two of us. I was so mortified. I slid my eyes to the kitchen door that Raef had passed through minutes ago. If he was still anywhere near the side of the house, his supernatural hearing would have just offered him an earful. Kill. Me. Now.
Ana, no doubt ready to perform a self-inflicted mental exorcism to erase the past few moments, hopped up from her seat as if she had been scalded. “Right. Good talk. Will keep it under advisement. Gotta get dressed,” she declared, bolting from the room. I think her little feet actually left a smoke trail in their wake. Her leg was definitely all healed.
I glanced at Mae and she eyed me over her steaming cup of coffee as she took a sip.
Somebody save me.

I have been a journalist for 15 years and serve on the Board of Directors for the Cape Cod Writers Center. I also drive a 16-ton school bus because I am ENTIRELY NUTS.

In addition to working jobs that should come with a warning label , I hold a BA in Psychos (Forensic Psych), torment the tourists about Jaws, and occasionally jump from the Town Neck bridge in an attempt to reclaim my youth.

I live on Cape Cod with two smallish humans who apparently are my kids, my fishing-obsessed husband, two canines (adept at both flatulence and snoring), and a cage-defiant lovebird that sleeps in a miniature tent. Nope - that's not a type-o. The bird is quite the indoor camper.