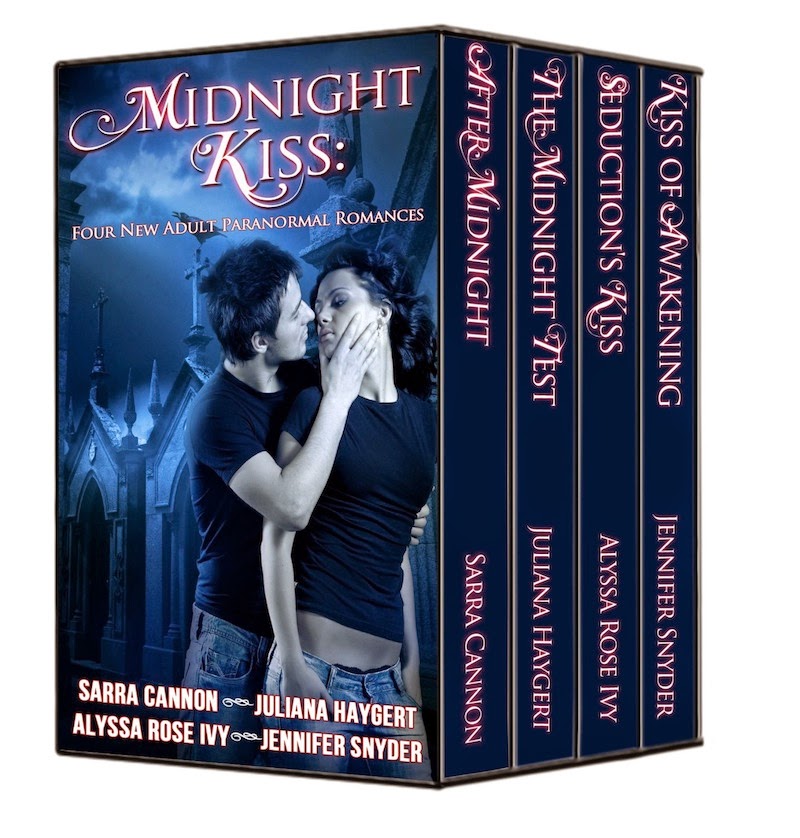 This Halloween, prepare to be haunted by a kiss…
Midnight Kiss is a limited edition collection of four BRAND NEW, NEVER RELEASED novellas, all set in New Orleans on Halloween night.

AFTER MIDNIGHT by Sarra Cannon

From the outside, Becca Goldberg looks like any normal freshman girl at Tulane, but she’s been keeping a terrible secret. She’s really Allison Moore—a young witch from Peachville hiding out from an evil coven of witches known as the Order of Shadows. She thinks she is safe until an unexpected accident occurs. Now, she only has until midnight on Halloween until her identity is discovered.
She must turn to the hottest, most elusive guy on campus for help. Will he help save her? Or will her life come crashing down around her after midnight?

My mouth hung open and I shook my head, unable to believe that John Pierce—the guy who had practically gone out of his way to make me feel like an idiot—was now the only thing standing between me and a fate worse than death. I had no idea what to say.
“Are you going to stand out there all night waiting for whoever’s looking for you? Or are you going to come inside where it’s safe?”
“Is it?” I asked, my voice trembling.
“What? Safe?” His eyes twinkled in the dim lighting. “You’re the one who came to me for help, remember?”
I forced my mouth closed and nodded. John stepped aside and let me pass.
The foyer was all high ceilings and polished wood floors. A crystal chandelier hung down from the top and a large sweeping staircase rose toward the second floor. Huge mirrors framed in gold adorned the walls, along with massive paintings that probably each cost more than a year's tuition at Tulane.
People in long, flowing gowns and capes and masks floated through the hallway like ghosts. None of the overhead lights were on, but candlelight flickered everywhere I looked.
The house was warm and dark and the moment I crossed the threshold, a strange heat blossomed in my belly.
I didn't know if it was the atmosphere of the party or the fact that I was standing uncomfortably close to a half-naked god, but I found it difficult to breathe. I couldn't take my eyes off him. He looked different in this setting. Better, if that was even possible. And to finally get a glimpse of the chiseled abs I'd known were hiding beneath his shirt? I couldn't decide if I'd just walked in to heaven or hell. Sarra Cannon:
Sarra Cannon writes contemporary and paranormal fiction with both teen and college age characters. Her novels often stem from her own experiences growing up in the small town of Hawkinsville, Georgia, where she learned that being popular always comes at a price and relationships are rarely as simple as they seem.

Her best selling Young Adult paranormal series, Peachville High Demons, has sold over 140,000 copies and been featured on Amazon's Top 100 eBooks for Children & Teens. The first book in the series, Beautiful Demons, will be adapted into a graphic novel by Sea Lion Books later this year, and a spin-off series will begin in 2014.

She is a devoted (obsessed) fan of Hello Kitty and has an extensive collection that decorates her desk as she writes. She currently lives in South Carolina with her amazingly supportive husband and her adorable son.

THE MIDNIGHT TEST by Juliana Haygert

Being the weakest witch of her generation, nineteen-year-old Hazel is convinced she’s supposed to live a normal, human life—except for the occasional ghost hunting. When Hazel moves to New Orleans, the most powerful witch coven in the world grants her a chance to join them, but only if she passes a dangerous test on Halloween night. Everything is going fine until mysterious Sean steps in Hazel’s way, putting her entire test at risk.
Will she be able to ace the test and keep them both alive at the same time?

A rush of dread and concern fleeted through me. I wanted to approach him, but after last evening, I wasn’t so sure I should. I had thought about him a lot last night. About how disturbed and lost he was, and how I really wanted to help him. Which was crazy. Why was I torturing myself like that?
Convinced I would regret my decision, I sat on the bench and scooted closer to him, but not too close.
Sean lifted his head, leaned back into the bench, and stared at me with wide eyes. “What are you doing here?” The bruises on his face were now black.
“I could ask you the same thing,” I said, trying to sound casual. “You don’t look like the praying type.”
One corner of his lips quirked up—my heart sped up—and his gaze traveled over me. “With that hair, piercing, tattoo, and all, I would think the same of you.”
I shrugged. “What? Just because my style is a little different, I’m supposed to be a faithless bad girl? A troublemaker?”
Sean returned his eyes to mine. “Well, I like your style.”
I felt a little blush creeping in my cheeks. As if realizing he had said something he shouldn’t, he turned his gaze to the altar.
Damn it. The guy couldn’t just say things like that and then leave me hanging. And why the hell was I thinking about that? The guy was damaged, broken, depressed. And he was rude to me yesterday. As much as I wanted, flirting with him was not right. Not until I helped him. Because I did want to help him. In fact, I wanted to tell him I was going to the mansion tomorrow night, and I would avenge his sister and his best friend. Hopefully, knowing they were resting in peace, Sean would be able to move on.

Juliana Haygert
While Juliana Haygert dreams of being Wonder Woman, Buffy, or a blood elf shadow priest, she settles for the less exciting--but equally gratifying--life of a wife, mother, and author. Thousands of miles away from her former home in Brazil, she now resides in Connecticut and spends her days writing about kick-ass heroines and the heroes who drive them crazy.

Never agree to a road trip to New Orleans with your roommate. At least not when your roommate is dragging you along while she reconnects with an ex boyfriend. Possible consequences of failing to take my advice:
1) Unknowingly going out with a vampire stripper.
2) Getting kidnapped by said vampire’s nest mates.
3) Falling head over heels for your winged hero.
Believe it or not number 3 is the worst one, especially when no one believes you that he exists.

“Come now, I assure you we’re going to get to know each other very well.” He licked his lips.
“No, we’re not.” I looked him straight in the eye. That’s when I noticed he had this same weird colored ring in his eyes that Duncan had. I looked at the other men, they had the same thing. Freaky.
“We are. And right now you’re going to put your wrists together so I can bind them.”
“Excuse me?”
“You heard me.”
“Why would I do that?” I stepped back. That turned out to be a mistake as I walked right into Duncan’s chest.
“Because you’d rather I didn’t kill your friend.”
I noticed he said friend in singular. Perceptive. Not that I wanted anything to happen to the guys.
“Please, just let us go. Is it money you want? I don’t have much, but I’ll give you what I have.”
Jeryl laughed. “Money? You think we want money from you?” He stepped closer just as Duncan wrapped his arms around me from behind. “We want something more primal from you.” He held his hand over my neck like he was going to choke me “Much more primal.”
“Don’t touch her!” Shaun yelled.
Jeryl laughed. “Showing concern for the girl who rebuffed you? Humans are so interesting.”
“Like you’re not human?” Chad asked.
“No. We’re not.”
In a flash, one of the guys holding Reyna leaned her head back and rested his long sharp teeth on her neck. Fangs. The guy had fangs.
Jeryl laughed at my obvious fear. “Hold your hands out behind your back, or he bites.”

Alyssa Rose Ivy
Alyssa Rose Ivy is a bestselling New Adult and Young Adult author who loves to weave stories with romance and humor. Although raised in the New York area, she fell in love with the South after moving to New Orleans for college. After surviving law school and earning her masters in library science, she turned back to her creative side and decided to write. She lives in North Carolina with her husband and two young children, and she can usually be found with a cup of coffee in her hand.

KISS OF AWAKENING by Jennifer Snyder

With one kiss, everything will change…
When a mysterious letter arrives from her estranged mother, twenty-one year old Kenna Blake and her best friend, Bree, make a trip to New Orleans hoping for a little Halloween fun and to get away. The mystifying Crescent City has something else in store for her though.
Cryptic messages, a hot tour guide, and a new sense Kenna can’t seem to explain are just the beginning of this eye opening trip. Will Kenna accept what awakens with in her or will she crumble under its reality?

Pulsating red lights lit the darkness behind my eyelids, and I opened them to see what it was. Delvin’s aura was throbbing. Its deep, dark red acting as a strobe light in sync with the beat of my heart—or maybe that was his. Moving my hand through his hair, I noticed the ring on my finger was a bright, glowing red as well.
A low sound emanated from Delvin as the heat in my mouth cooled to a sweetness unlike anything I’d ever experienced before. The red of his aura speckled with flecks of gray, and the rhythm Delvin had set for us slowed.
While my mind seemed to gather all of this, I couldn’t process any of it because something was happening to me. My insides were burning and cooling as though I was suffering from an insane bout of hot flashes. Every trace of the tequila I had consumed evaporated from my mind and body until I was completely sober.
Delvin’s hands fell to his sides. The edges of my dress he’d held fell to my feet in a swooshing motion. He grew ridged in his stance. While his lips had long ago paused in their movement against mine, I couldn’t pull back. I couldn’t stop whatever was happening. The taste was amazing, and the rush I was getting—an incredible high I had never felt before—rocketed me higher. Alcohol couldn’t touch this feeling, nothing could. 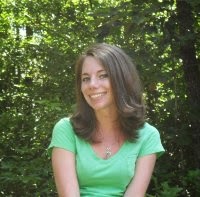 Jennifer Snyder
Jennifer Snyder lives in North Carolina were she spends most of her time writing new adult and young adult fiction, reading, and struggling to stay on top of housework. She is a tea lover with an obsession for Post-it notes and smooth writing pens. Jennifer lives with her husband and two children, who endure listening to songs that spur inspiration on repeat and tolerate her love for all paranormal, teenage-targeted TV shows.

Find out more about her latest novel by visiting her website:
jennifersnyderbooks.com 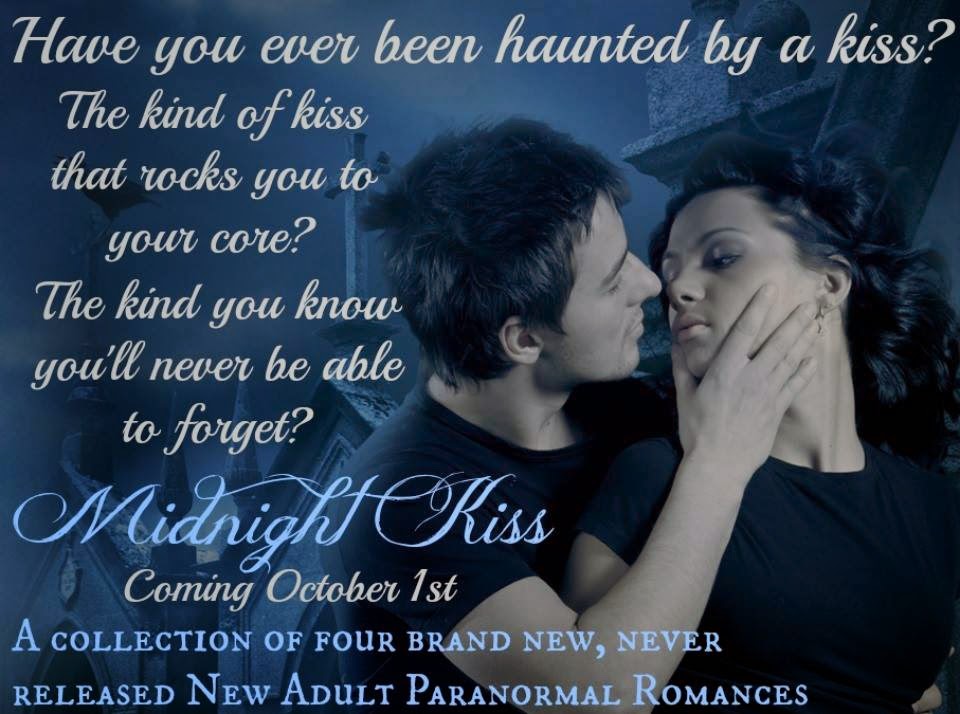