Krymzyn by BC Powell Book Blitz and Giveaway! 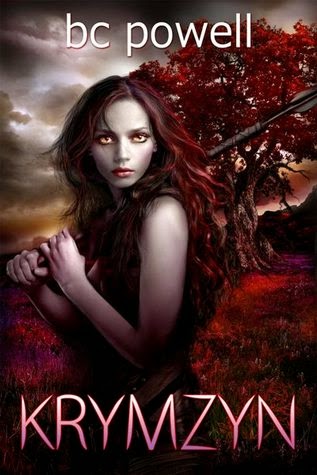 
Chase was twelve the first time he arrived in a strange land where dark, ominous clouds never move, ancient trees violently spring to life during Darkness, and people seem to live without emotion. Doctors tell him they’re hallucinations, but he knows his visits are real. She’s there-Sash-and she’s more real than anyone he’s ever known.
His visits stop but, as years pass, the memories haunt Chase. Without warning, the young man suddenly finds himself again in a world called Krymzyn. Arriving during Darkness, he’s rescued from death by the extraordinary, beautiful but terrifying young woman he first met when he was twelve.
When Chase is thrust into the war of balance against vile creatures who threaten all who live there, Sash helps him understand his purpose in Krymzyn. A dark secret from the beginning of time reveals he might be able to stay there forever. To prove he belongs in Krymzyn and be with the only woman he can ever love, Chase will have to risk his own life in the ultimate battle.

A Male Author in a Female-Dominated Genre

If you scan “new adult” and “young adult” novels, the vast majority of titles you come across are penned by female authors. So why am I, a man, writing in this genre?
First, let’s define “new adult” as something more than just a novel with the protagonist in the eighteen-to-twenty-six-year-old age range. Wikipedia says:
“Many themes covered in young adult fiction such as identity, sexuality, depression, suicide, drug abuse, alcohol abuse, familial struggles, and bullying are also covered in new adult fiction, but the various issues that are dealt with in the category hold it separate. Some common examples of issues include: first jobs, starting college, wedding engagements and marriage, starting new families, friendships post-high school, military enlistment, financial independence, living away from home for the first time, empowerment, loss of innocence, fear of failure, and many others.”
The last time I checked, all of those issues are faced by both males and females. So why aren’t more males writing in the genre? It’s important to remember that women buy 58% of all books published and closer to 70% of “new adult” novels. So is this a case of women authors being better able to cater to the audience?
I have three sons ranging in age from sixteen to twenty-three. Raising them in Los Angeles, I’ve experienced firsthand the challenges this age range faces in today’s world. They’ve each had to overcome their own individual struggles and obstacles in life. As a father, I’ve been incredibly proud to watch how they’ve handled those struggles.
The male protagonist in “Krymzyn,” Chase, is full of qualities I admire in my own children. He just happens to face many of the challenges inherent to the new adult age range while in an alternate dimension. No matter what’s thrown at him, he always maintains the “take whatever comes in stride” attitude I admire so much in my sons.
But that brings us back to, “Why do women authors dominate the genre?” I believe the answer is that many male authors, knowingly or not, write from an androcentric point of view:
Androcentrism is the practice, conscious or otherwise, of placing male human beings or the masculine point of view at the center of one's view of the world and its culture and history.
“Conscious or otherwise,” we (men) just can’t help but inject our egocentric male attitude into most of what we do. That POV won’t appeal to most female readers. I felt I had to take steps to break out of that mold to successfully write in this genre.
My first step was to choose a woman for my initial critique who is highly experienced in sci-fi and fantasy. More importantly, she ripped apart any scene or dialogue in the manuscript that slipped into androcentrism. The editor I work with is also a woman who frequently works in the YA and NA genres, a conscious decision on my part. In my notes to her, the first comment I made was, “Please mark anything you see as having an overly male attitude.” And she did. (Thank you, Mickey!)
This doesn’t mean that the book is written simply to cater to a female audience. Chase is the embodiment of wonderful qualities that I hope shine through his character to both male and female readers. He faces certain challenges inherent to males and shares his male perspective on events and emotions, but most of his struggles are those common to both sexes. In his interaction with Sash, the female protagonist, he always lives by the words I spoke to my sons when I had “the talk” with them. “Always show respect for your partner, physically and emotionally, and expect the same in return.” We have to remember that respect goes both ways.
And that brings us to Sash. I listened to comments from every male and female beta-reader as well as my editor about anything that “lessened” her in their eyes. I want her to be extraordinary, strong in the eyes of both men and women, and never in need of rescuing. In fact, most of the time, she’s the one doing the rescuing. In the end, I hope it’s obvious that she doesn’t need Chase to be who she is, and Chase doesn’t need her. But, together, they can be so much more than they would have been apart.
I don’t consider this a “messagey” book. But woven into the story are underlying themes that are important to me: being aware of the world around you, caring for and judging people based on who they are inside, and being true to yourself. These are struggles every one of us has had to face. They’re critical to our human discovery and development during the “new adult” years. In the end, I’m hopeful that a male author can bring a slightly different perspective and fresh understanding to these struggles.

AUTHOR BIO:
BC Powell is a fantasy author from Los Angeles, CA. "Krymzyn" is his debut science fiction fantasy novel, the first book in a series titled "The Journals of Krymzyn."
Powell has a diverse background, having held several creative positions in the entertainment industry, including executive roles at ABC-TV and Technicolor. In recent years, he's authored several non-fiction works, primarily educational books and training programs for trading the financial markets. He dual majored in journalism and philosophy at Trinity University in San Antonio, Texas.
Writing fiction has been his lifelong passion and goal. "Krymzyn" is his first published novel and represents, in his words, "finally finding the story I want to tell with characters that are able to bring that story to life." He's an avid reader and lists Ernest Hemingway, Frank L. Herbert, Stephen King, Jane Austen, and Kurt Vonnegut, Jr. as his favorite authors.
Brad, as he prefers to go by in personal communication, lives with his longtime girlfriend, three sons from a previous marriage, and their rescue dog and cat. He enjoys hiking, ocean kayaking, spending time at Southern California beaches, movies, and reading.