My Summer Roommate by Bridie Hall Book Blitz and Giveaway! 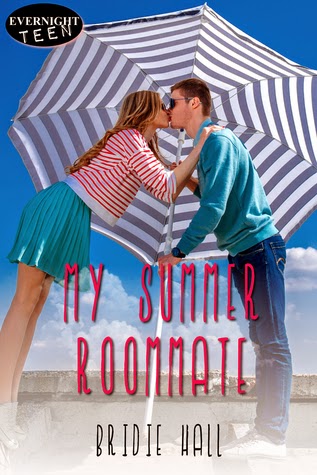 Chloe needs a place to crash for the summer before college. When Chris offers, she moves in with him. It’s just for two months, no biggie. But soon she realizes she may have made a mistake. He is too perfect; a former snowboarder, laid-back and kind to boot, and he’s smitten with her. But she’s got trust issues and a relationship feels daunting. When he keeps trying to win her over, the temptation becomes overwhelming.
Just as she gives in and decides it’s not worth fighting their emotions anymore, Chris reveals he’s made a stupid mistake which might ruin Chloe’s trust in him and tear them apart.

Thanks for hosting me on your blog.

Today I want to discuss the importance of side characters. They may seem insignificant or like fillers that flesh out the story, but they are far more than that. Good side characters, at least. For example, My Summer Roommate exists solely thanks to an initially side character – Chloe. When I wrote her in Letting Go, she charmed me so much that I had to give her a separate novel and let her tell her story.
Even though Chloe didn’t get all that much page space in Letting Go, she was a very well-developed individual in my mind. Writing Chloe, I learned that we, writers, should pay as much attention to our side characters as to our protagonists. Secondary characters not only help move the plot along or function as a sounding board for the main characters’ thoughts and ideas etc., they are also a mirror. We can use them to highlight the protagonist’s character, their weaknesses or strong points. By writing a side character react in a certain way we give the reader an idea of how they feel about the protagonist, whether they agree with them, despise them, admire them etc. Side characters can be a powerful characterization tool.
As for the sounding board function – that’s Sal’s role in My Summer Roommate. He was an absolute delight to write. I didn’t write him until well into the editing process because I felt something was missing in the story. Chloe had Isabelle and her mother and Eric to talk to, but Chris was all alone with his family back in Colorado. He needed someone to bond with, and as unlikely a character as Sal seems, he is perfect for that role. He adds a bit of humor, some sage advice, and a sad backstory to support his counsel.
I think I wrote all his scenes in a single day because words just wrote themselves. I was thrilled with him and I loved to write him. Again, that was because he’s a rounded character, with his own motives and hopes and regrets, and it was like I were talking to a friend when I wrote his dialogues. Secondary characters that are only there to fulfill a task, like asking a question that needs asking, but have no personality themselves are a bore to write and to read too. They don’t feel like characters but more like a plot device, and that will make the entire novel feel contrived and unnatural.
Besides, if you write secondary characters well, there’s no need for many plot devices, as the story will unfold itself. The initial plotting for My Summer Roommate was driven entirely by Chloe’s character – the same character I developed as part of her acting in her supporting role in Letting Go. Furthermore, the biggest changes I made during the editing stage were the plot changes spurred on by Sal’s appearance. This in itself convinces me that secondary characters are a treasure trove that we need to explore and take advantage of if we want to write compelling stories.

AUTHOR BIO:
Bridie Hall sold her first story at fourteen. Since then, she has written dozens more, translated books, studied writing, and started writing novels. Her days revolve around stories and words, her sleepless nights involve plotting and inventing fascinating new characters. The only activity that takes up more of her time than writing, is reading.