The Misadventures of Hobart Hucklebuck by Stan Swanson Blog Tour and Review! 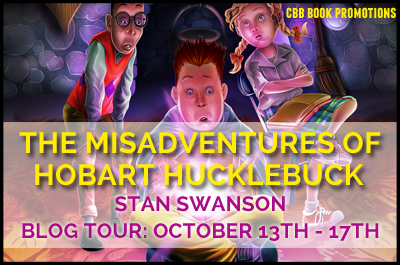 Welcome to my stop on The Misadventures of Hobart Hucklebuck by Stan Swanson. Its a middle grade fantasy and the tour runs October 13-17 with reviews & author interviews. Check out the tour page for the full schedule.
The book is aimed at ages 8-12 but as an adult I found it wildly entertaining and a load of fun! 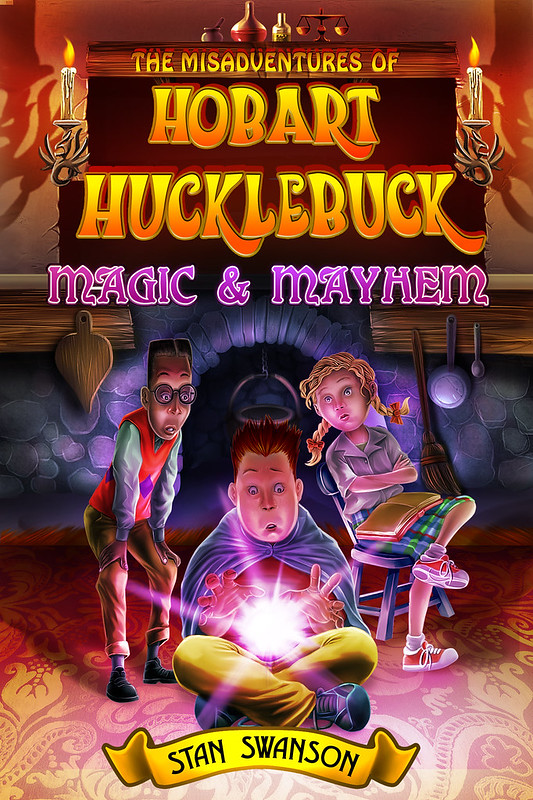 The Misadventures of Hobart Hucklebuck

Things are not as they should be in Pennywhistle. Enchanted toasters are not toasting, enchanted sprinklers are not sprinkling and Hobart Hucklebuck's origami messenger birds are suddenly attacking him. Someone seems to be draining the power from all of the enchanted items in the village. But who could it be and why have they implicated Hobart's grandfather? The Misadventures of Hobart Hucklebuck: Magic & Mayhem follows Hobart and his friends, Specks Spacklethack and Rosie Rumpleskirt, as they try to solve this mystery and free Hobart's grandfather from the Tower of Tribulation on Mumblemonk Mountain. The trio's investigation into the mysterious happenings on Druid Lane gets them into hot water more than once and ultimately brings them dangerously close to disaster not only for themselves, but the entire village of Pennywhistle.

When Hobart tells his toast to jump into the toaster and nothing happens, he finds it odd but puts it down to a bad loaf! When more and more enchanted items cause trouble Hobart knows something is wrong. Then his Grandfather is thought to be guilty of causing the magical malfunction and arrested, Hobart knows its down to him to find the culprit. He enlists the help of his 2 friends, and an enemy, to help get to the bottom of the disaster but can they find the culprit in time?

Well this is such a fun cute read. My boys really enjoyed the story and my 4 year old loved the alliteration used. Not that he has any clue what alliteration is!! Lol. He just loved how all the names were funny.

What a fun bunch of characters in this book. All of them were well written and developed. My boys loved Hobart and said he was "brave" and "awesome" and they found it funny that he was so afraid of cats. They loved the specter that worked in Hobarts' Grandfathers shop and they also loved the different shop names. My 4 yr old asked would our bread butter itself if he asked and when I said no he said why not!!!

I really liked the plot and the sense of "who done it". All the shop owners could of caused the magical malfunction but its hard to know who did it and who is just plain strange!! The mystery plays out till the very end and with plenty of suspects it does come as a surprise when the culprit is revealed.

Overall this is a really fun, magical, adventurous read. My boys loved it and laughed a lot while I was reading it, which for me is a great sign!! They showed interest the whole way through the story and were constantly looking forward to seeing what Hobart would do next. Then when they asked when was the next one out I knew this was a winner for them! 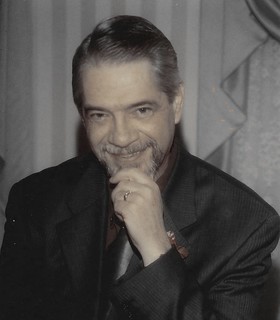 Stan Swanson is a Bram Stoker award finalist and author of eight books including Horror High School: Return of the Loving Dead (the first book in a young adult horror series co-written with Araminta Star Matthews), Wind Up Hearts (a romance novella with a hint of steampunk), Forever Zombie (a collection of short stories), Write of the Living Dead (a highly-praised writing guide written with Araminta Star Matthews and Rachel Lee) and Return of the Scream Queen (co-authored with Michael McCarty and Linnea Quigley). He is also editor/publisher for Dark Moon Books and Dark Moon Digest. Upcoming titles include Dead Sparrows (a collection of apocalyptic poetry), The Methlands (a horror novel co-written with award-winning author Joe McKinney) and The Misadventures of Hobart Hucklebuck: Pandemonium in Pennywhistle.