The Emissary by Kristal Shaff Blog Tour and Giveaway! 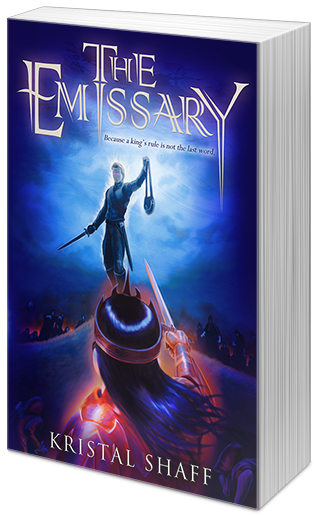 For hundreds of years, dark clouds covered the skies of Adamah, and an ageless king ruled. Those who emerged with one of six extraordinary Shay powers were forced into the king’s army, an unmatched force with inhuman Strength, Speed, Accuracy, Perception, Empathy, and Healing. With the army behind him, the king—a man who wields all six abilities—was invincible and unquestioned in his rule. To most, serving the king was an honor. But for others, it was a fate worse than death.

When seventeen-year-old Nolan Trividar witnesses the transformation of his brother from kind to cruel after entering the king’s army, he vows never to follow the same path.

So when his own power—the Shay of Accuracy—comes upon him at the Tournament of Awakening, Nolan conceals his emergence instead of joining the king’s ranks. For years, he traitorously hides his power, pretending to be only a gifted scribe. But when Nolan comes face -to-face with a deserter, the man discovers his secret.

To evade detection and a death sentence, Nolan escapes with the deserter and flees into a night filled with dark creatures who steal both powers and souls. He joins a resistance, a village hidden deep in the forest, filled with others who secretly wield a Shay. But his peace is short-lived when they discover that the dark clouds, undead creatures, their own decreasing powers, and even the king, are all connected.

A Special Note to Readers: Reading is like eating a gourmet meal.

Writing can be a lonely hobby, especially when it can take years to bring a book to reality. Before I became a writer, I was an avid reader. I can still devour a book in just a day or two.
Back then, I didn’t realize how long it takes to write a book.  A day or two of reading was most likely years or writing and editing, loads of willpower and perseverance,  and  a few tears of rejection thrown in for good measure. All of this happens before a book reaches a reader’s hands.

It is much like a gourmet chef  who prepares a meal. They work behind the scenes, brining the meat, seasoning, letting things marinate for hours or even days. When they bring it out, they hope the consumer gobbles it down quickly. The chef watches in satisfaction as they enjoy the meal. Like the chef, the writer can’t wait for someone else to enjoy what they’d prepared.

For those of you who have already stepped up and read my book, thank you. There are no words to express how it makes me feel. To finally be able to share it with you, after so many years of stubborn perseverance to reach this point, fills me with such profound satisfaction.  And yes, tears. This time tears of happiness.

If you are considering reading, please do. I would love for you to immerse yourself, get carried away, and join me in my world. It’s not the same without you, the readers. Thank you so much for letting me finally share THE EMISSARY with you.

Kristal Shaff grew up with books (and used to drive her mom crazy when she wouldn’t leave the library); her first job was even shelving books at the library. She loves anything creative, and you can often find her exploring strange and fantastical worlds in her choices of movies and fantasy fiction. Kristal resides in Iowa with her farmer husband, numerous pets, and 3 awesome  kids (plus one more on the way though the journey of adoption). When she isn’t writing, she is a professional face painter who enjoys making children smile.